My Company has a number of Small Business customers who are relying on basic internet connections from Comcast, Fios, Charter, etc... for their primary internet. Most of these Customers already have a primary Internet Gateway/Router that they purchased or rent. My company provides Managed Security Services and these Customers are interested in Firewall solutions but aren't willing to change their existing setups. They want something dropped inline that doesn't change their setup.

We're wondering if there is an Architecture with Layer 2 Transparent bridging on some ports that will work in this setup. This would require a device to Bridge Traffic to the Gateway (pass the DHCP request) then have some capability to also communicate outbound for updates/management with only one DHCP lease. One port would need to be Layer 3 to get a routable IP and point to a Gateway for internet updates.

Use Case would be:

Does anyone know if this is possible with any Checkpoint UTM devices?

Based on this article: Bridge Mode  it sounds like this could be possible, but I'm not clear.

The article section that is interesting: 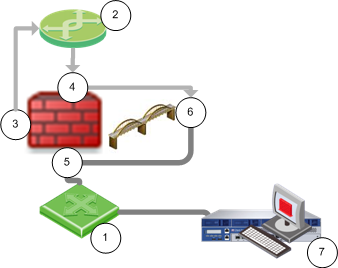 When a Layer-3 management interface sends traffic through the firewall, the traffic is dropped because it cannot inspect the same packet again.

Use the procedure for the applicable Security Gateway version.

Yes, you can do what you describe.

However, there is an issue that you will run into where the gateway will reject its own management traffic due to "local interface spoofing."

This can be overcome with the following SK: When configuring two interfaces in Bridge Mode, traffic is dropped due to "local interface spoofing"

However, we are working on a more turnkey solution solution called SandBlast Now.

It was presented at our recent CPX 360 events.

If you're interested, I can connect you with the relevant parties.

Spencer_Lichten
Explorer
In response to PhoneBoy

That would be fantastic if possible. This is an extremely high priority for us so I would love to speak to anyone involved.

PhoneBoy
Admin
In response to Spencer_Lichten

I’ve already given your details to the relevant parties.

You should be contacted shortly if you haven’t been already.