I am upgrading our firewalls from R77.30 to R80.10. We have 17 ClusterXL clusters in high availability mode. Each cluster has two members running the GAIA OS on VMWare. I’m attempting to use the connectivity upgrade method to minimise disruption.  To create enough space to copy  the installation file “Check_Point_R80.10_T421_Fresh_Install_and_Upgrade_from_R7X.tgz” onto the firewall and import it I have had to:

During these steps you need to reboot the firewall a number of times. This is fine when upgrading the standby cluster member. Then after that I use the cphacu commands to failover to the newly upgraded cluster member. So far so good and no disruption to the network. Then when I expand the hard drive size etc on the former active member and reboot it, it becomes the active member again. This is a hard failover and any open connections are dropped. You need to reboot 3 times and each time we failover over to the upgraded member and back causing disruption on the network.

There's a setting in the Gateway Cluster Properties that controls this.

Make sure "Maintain current active Cluster Member" is enabled prior to doing an upgrade. 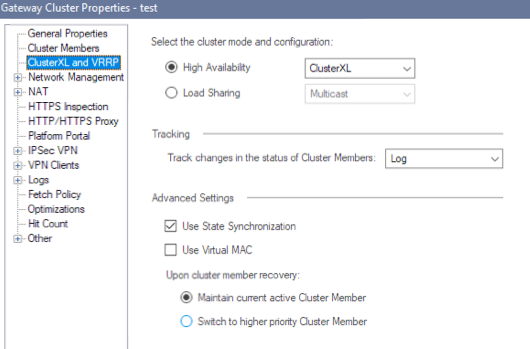 Thanks Dameon, I saw that setting there, however I thought that a cluster member having a lower software version would override this setting?

I don't believe that is necessarily the case here.

Speaking of which, there's a step listed there that talks about changing the version of the cluster before proceeding to upgrade the primary, specifically pushing the policy only to the secondary member.

Did you do that step?

I believe that's relevant to solving the problem as the "policy ID" is encoded in the CCP packets (see the ATRG): ATRG: ClusterXL

When you do this step only on the secondary member, the policy ID will be different, which should cause the original primary to back off until it gets back in sync.

OK thanks I'll give it a shot with the 'Maintain current active Cluster Member' setting enabled and report back on how it goes.

So I tried out using the "Maintain current active Cluster Member" setting , however the same problem as described in my original post occurs. After upgrading fw2 and failing over to it using the cphacu commands, then rebooting the non-upgraded firewall(fw1) the status of the firewalls is:

On the upgraded firewall

Ready state reason: another member was detected with a lower FW version.

On the non-upgraded firewall

Moti
Admin
In response to PhoneBoy
Jump to solution

Great Thanks Dameon, wish I had thought of option 1 myself.

Ofir_Shikolski
Employee
In response to PhoneBoy
Jump to solution

Moti
Admin
In response to Ofir_Shikolski
Jump to solution

Please provide a link that describes it

Ofir_Shikolski
Employee
In response to Moti
Jump to solution

Cluster upgrades are performed automatically according to the sk107042 - ClusterXL upgrade methods and paths.

The CDT uses CPUSE Agents on the remote managed Security Gateways and Cluster Members to perform package installation. The CDT monitors and manages the entire process.

The CU use fwha_version kernel parameter part of the process.

PP26
Contributor
In response to Ofir_Shikolski
Jump to solution

It is my first post and sorry if it is a silly question but just wanted to know if checkpoint has a solution yet to this problem? As in the secondary firewall once it has been upgraded it will remain as Primary/Active while we are working on original Primary (irrespective of the number or times the primary reboots) .

I am planning an upgrade this weekend with 1 SMS and two GW ClusterXL (HA)(77.30 to 80.20) and was reading the guide about best practice with CU and in Step 17 page 18 it only says that one will be active and other will be standby, but does that mean it could be Original Primary becomes primary ? What If  I want to control that and only failback once the Primary (original primary) is completely ready?

Thank you in advance

@PP26 I think, terminology is a bit off here.

We are talking Active | Standby | Ready when doing GW clustering. During cluster upgrade, the first cluster member you lift to R80.20 will be in Ready or Standby state depending on CU parameters. When the "old" cluster member is turned off, the new one becomes Active.

Hi @_Val_  apologize for the confusion. So let me try again to hopefully ask my question a bit better .

Lets use Primary FW = A and Backup = B

So I lifted B to R80.20 first and then I turn off new member as per

I have to increase the volume or lets say update CPUSE or something else due to which I need to reboot it before actually upgrading to 88.20. So when this comes back up will it take the role or being Active ? As per the original persons post seems like since this is lower version it will take it ? yeah ?

If I only have to do one reboot and that would be for 88.20 upgrade, then as soon as it comes online , will it automatically take the role of being Active and kick out FW B from being Active? Or will it wait until in the above link we complete step 16 (page 18) when we Install the Access Control Policy ? As in the document it says in step 17 the one will be active it does not say which one will be active .

Basically I am trying here to control that FW A does not become active until I see the upgrade has properly completely and then I make FW A as active by restarting CP service on FW B.

I hope I am able to explain this well. Sorry about the confusion 🙂

If you reboot R77.30 member before upgrading, it will resume Active state after booting. To avoid issues, you may want to disconnect it from production networks.

When both members are on R80.x, the actual cluster roles both cluster members assume are controlled on the cluster object. It can be that current active remains or it always fall back to the higher priority member. 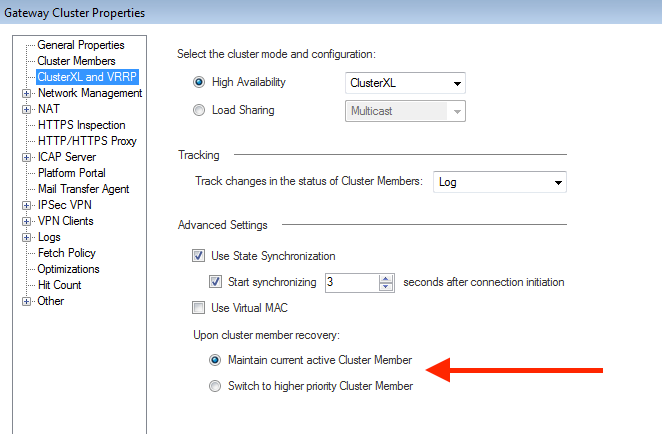 Once again thanks a lot for helping out. On you response about

"If you reboot R77.30 member before upgrading, it will resume Active state after booting. To avoid issues, you may want to disconnect it from production networks"  << I believe you mean once my backup has be upgraded to 80.20 and now if before rebooting Primary which is still on 77.30 if I reboot it . Correct?

I am going to do this work remotely and hence if I remove it from network even I will not be able to access it . Can you suggest a way to overcome this so that I can still be able to access it ? I though about shut down all interfaces except for just the mgmt interface , will that work ? or will mgmt interface being up can cause the 77.30 member to still come back up after reboot and resume its Active state ?

Also I saw in this post (few response above) some suggestions where we can change some fwkernel value on member which is on 77.30 to make it look like it is on higher version so that when it reboots it will  think/believe it is on maybe 80.30 while the actual Active would be on 80.20 so after reboot it will not take Active state?

Sorry for too many questions.

HI @_Val_  but the guide does not talk about multiple reboot and what happens in that scenario, hence my confusion.

K__Merker
Explorer
In response to PhoneBoy
Jump to solution