SecureXL has been significantly revised in R80.20. This has also led to some changes in "fw monitor". There are new fw monitor chain (SecureXL) objects that do not run in the virtual machine.

Now SecureXL works in part in user space. The SecureXL driver takes a certain amount of kernel memory per core and that was adding up to more kernel memory than Intel/Linux was allowing. The packet flow in R80.20+ is a little bit different from the flow lower than R80.20. Now it is possible to use async SecureXL and other new functions. This figure shows the new features with the reinjection of SecureXL packages. SecureXL supportes now also Async SecureXL with Falcon cards. That's new in acceleration high level architecture (SecureXL on Acceleration Card): Streaming over SecureXL, Lite Parsers, Scalable SecureXL, Acceleration stickiness... 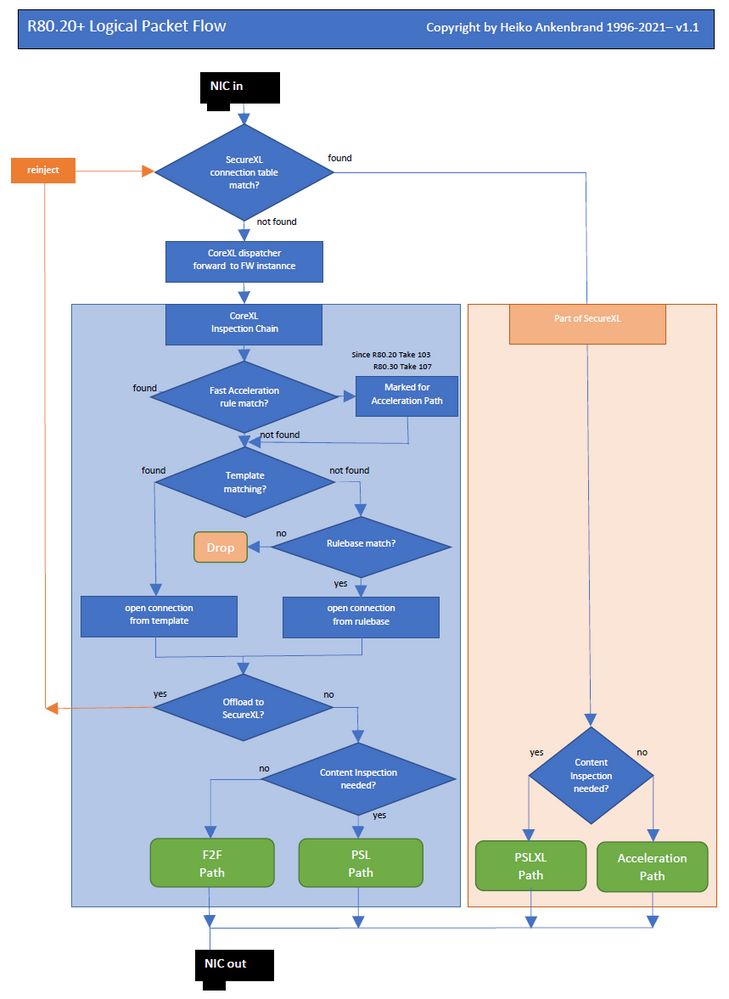 PXL vs. PSLXL - Technology name for combination of SecureXL and PSL. PXL was renamed to PSLXL in R80.20. This is from my point of view the politically correct better term.

For the new acceleration Falcon card architecture with R80.20+ and SecureXL offloading read this article:

PhoneBoy
Admin
"fort he" typo in the middle of the diagram.
0 Kudos
Reply
Share

HeikoAnkenbrand
Champion
In response to PhoneBoy

I'll change tomorrow in the next version.

And I think that is brilliant information from @HeikoAnkenbrand.

Why packets reinjection with the neu SecureXL ID into the correct SecureXl instance is needed?

Yes @Timothy_Hall  describes this well, from R80.20 there are correction flows. They forward the packet to the correct SecureXL instance.

Through reinjection, the packet is tagged with the correct SecureXL ID and then forwarded to the appropriate SecureXL instance. This is now also described in the new R80.30 document Performance Tuning R80.30 Administration Guide.

Here is a picture from a LAB appliance with corrected packet flow:

Is this CCSE exam relevant?

_Val_
Admin
In response to R2D2

Technically speaking, no. However, this helps with understanding of technology. That said, I advise you to stick with official documentation and course textbooks for certification