as we switched from R80.10 to R80.30 kernel 3.1 with UMFW I am looking for some in-depth information if packet handling changed because of e.g. SecureXL no handled by usermode. I found all the great information gathered by @HeikoAnkenbrand but until now could not find infos on the topic below.

After the upgrade we could see much less cpu usage on SNDs then before but much higher load on the fw_worker instances.

Actually before the change we had average 80% CPU on SNDs and 30% on FW_workers and now we have 10% on SNDs but 70% on FW-workers. We upgraded hardware to faster CPUs (3,2 GHz in opposite to 2 GHz) but core number stayed the same with 16 cores. We used multi-queue before but with R80.30 we could now use multiqueue for all interfaces.

Nevertheless my feeling is that some processing that was done by SNDs before has now moved to the fw_workers.

Note that we currently have a high number of VPN clients connected due to Corona.

Thanks for any insights.

This is an exciting question. I can confirm similar behavior on some firewalls. What surprises me is that the basic process is already producing about 10%-20% CPU load (without firewall traffic).

In UMFW the fw instances are threads of the fwk0_dev_0 so by default the top shows all the threads cpu utilization under the main thread. Top has the option to present the utilization per thread as well.

A small calculation sample for the utilization of process fwk0_dev_0:

yes I also found the Shift+H option for top to display the single fw_worker processes.

But if there is a change in handling traffic distribution differently there is at least in my case the need to change SND/CoreXL distribution configuration as well.

But before I wanted to understand why I can see this (heavy) shift in load from SNDs to fw_worker´s CoreXL instances.

I´ll have to add that there are these new "snd" processes which consume also cpu:

So at least there is another process which seems to be related to SND processing ...

Probably the biggest change between R80.10 and R80.30 is templating. It used to be handled in SecureXL. Now all templates are moved to FWK.

If FWK is matching a packet to a template (and accelerated connection), it re-injects it back to SXL. As shown in sk153832: 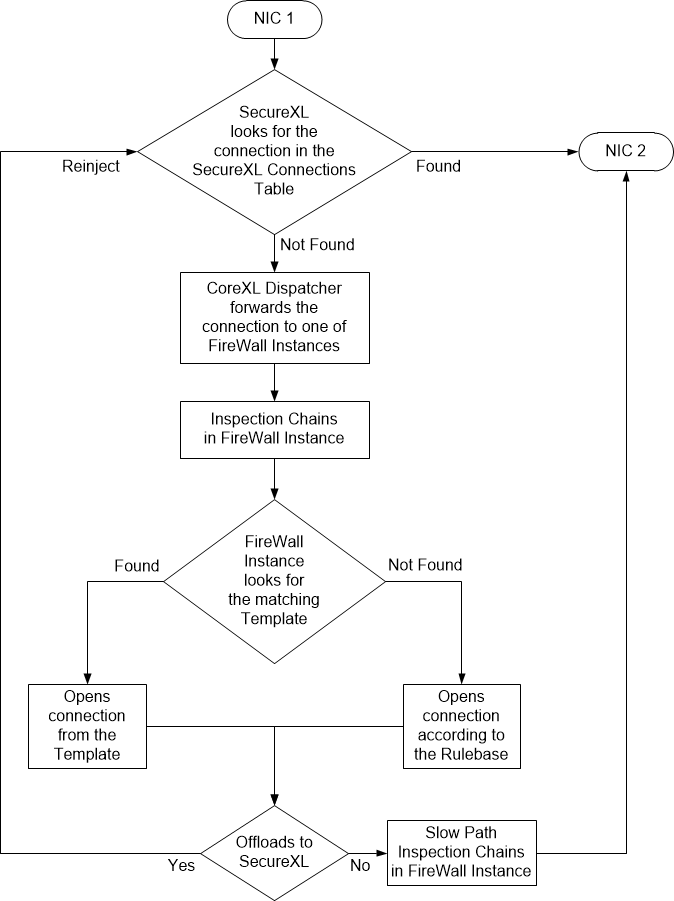 Carsten_R
Contributor
In response to _Val_
Does it mean, a re-calculation of the fw_worker cores has to be done? like more fw_worker and less SNDs?
0 Kudos
Reply
Share

_Val_
Admin
In response to Carsten_R

With this feature, system is automatically balancing amount of SNDs and FWKs to keep reasonable CPU utilization.

This shift may well require reducing the number of SND cores after an upgrade to R80.20+, but this is not a hard and fast rule and highly depends on how much traffic is fully accelerated by SecureXL (Packets/sec in fwaccel stats -s output).  With the R80.20 changes, in some cases much more traffic can be fully accelerated by SecureXL than before, thus increasing the load on the SND/IRQ cores...

Now, I am even more worried about my 4-core 3600 that has UMFW enabled by default 😄

Why do you have it in the first place? There is no point to enable UMFW with less than 40+ cores

That's how it came from CheckPoint. Do you mind ask R&D to confirm it is not enabled by mistake ? It does not make sense to me either...

It should not be enabled, unless you are running R80.40. Do you?

It came from the factory with R80.30 and UMFW enabled by default. I am sure about that. Now it is indeed running R80.40. Shall I leave it like that ?

All right, good to know. Thank you!

Rob_Bush
Participant
In response to _Val_
Just a quick FYI. I upgraded a 4400 series cluster to R80.40 and UMFW was enabled after installing via a BLINK upgrade. My firewall is now averaging about twice as high of CPU load as compared to when it was running R80.30. I have been following this and other UMFW threads closely because it sure sounds like we should be disabling UMFW on any firewall with less than 40 cores, but I'm hesitant to do that considering that Checkpoint obviously started enabling UMFW by default in R80.40 regardless of the number of cores you have (or they have a bug in their code and it's incorrectly enabling it.)
0 Kudos
Reply
Share

Sorry, to hijack this thread with something else. I will open another one concerning UMFW on lower CPU appliances in a hope to get it clarified.

PhoneBoy
Admin
In response to HristoGrigorov
USFW is default on any appliance released in 2020.
It’s also default in any appliance with more than 40 cores.
The overall performance impact of this (especially in R80.40) should be neutral to positive.
0 Kudos
Reply
Share

Rob_Bush
Participant
In response to PhoneBoy

@PhoneBoy wrote:
The overall performance impact of this (especially in R80.40) should be neutral to positive.

After upgrading to R80.40 from R80.30 on my 4400 appliance, I can tell you that my CPU process is WAY higher. I can't say if that's because of UMFW or not, but I can say UMFW was turned on as part of the upgrade on a 4400 appliance with a whopping 2 cores on it. For all I know, it could be that R80.40's HTTPS inspection is handling more HTTPS traffic than ever and the increase is due to that. I don't have the full expertise or time to dig in and find out exactly why the CPU is so much higher than R80.30, I just know I'm getting more CPU alerts than ever since upgrading. Thankfully this year we are do for hardware upgrades, so I'm just limping along until that can occur.

PhoneBoy
Admin
In response to Rob_Bush
Not sure why USFW was enabled on a 4400 as it's definitely not necessary there.
Could be something else.
0 Kudos
Reply
Share

Rob_Bush
Participant
In response to PhoneBoy
So is it worth researching into turning this off on my 4400 and 4800 series appliances, or just leave it alone?
0 Kudos
Reply
Share

PhoneBoy
Admin
In response to Rob_Bush
Unless you're experiencing major issues, I would probably leave it alone.
0 Kudos
Reply
Share

Rob_Bush
Participant
In response to PhoneBoy

Quick update on this.  I was working with CP support on an unrelated issue and they noticed that usermode FW was turned on for our 4000 series gateway and they turned it off.  My CPU usage was cut in half when they did this.  Clearly this should not be turned on for a box this small.  Just a reminder, I did not turn on usermode fw, it was turned on automatically by the R80.40 install.

That's not supposed to happen, see my response here:

However whether USFW is enabled by default has been in a bit of flux over time, can you recall when you fresh-loaded R80.40 on your 4000?

Hehe, I know it's not supposed to happen, that was the entire reason I replied back to let you know that it is being enabled by default on an R80.40 install on a certified 4000 series appliance that does not meet the minimum requirements to have it enabled.

I wrote the following about a month ago:

Just a quick FYI. I upgraded a 4400 series cluster to R80.40 and UMFW was enabled after installing via a BLINK upgrade. My firewall is now averaging about twice as high of CPU load as compared to when it was running R80.30. I have been following this and other UMFW threads closely because it sure sounds like we should be disabling UMFW on any firewall with less than 40 cores, but I'm hesitant to do that considering that Checkpoint obviously started enabling UMFW by default in R80.40 regardless of the number of cores you have (or they have a bug in their code and it's incorrectly enabling it.)

There will be a post from @shais that shall provide us with more info and answers as to why, when and where is USFW enabled, what is the performance impact, etc. So, stay tuned.

SecureXL underwent dramatic changes in R80.20, and these changes apply regardless of whether the Firewall Workers are in kernel mode or USFW.  More overall responsibilities were shifted to the Firewall Workers, and this is a bit more discernible when in USFW mode as you can see the CPU being used by the individual fwk* processes/threads mentioned by Heiko, instead of all the CPU time just being lumped into sy/si in kernel mode.

All packets still come through SecureXL/sim/SND first after being emptied from interface ring buffers by SoftIRQ in R80.20+, but unless the packet matches an existing connection in SecureXL's state table, the packet is sent to a Firewall Worker instance which decides whether the connection matches an Accept template, which path the connection should be processed in, etc.  This shift in responsibilities is so important to tuning that I created these tables in the third edition of my book documenting the shift in tasks between SND/IRQ cores and Firewall Workers that occurred in R80.20, as well as how the processing paths changed.  Hopefully these tables will help... 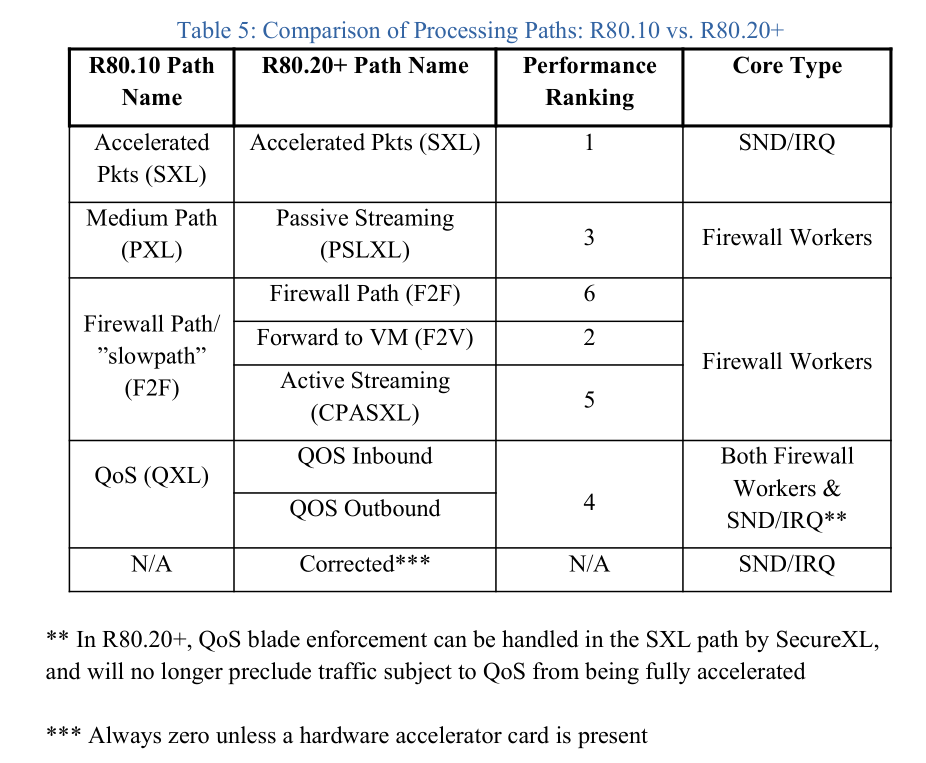 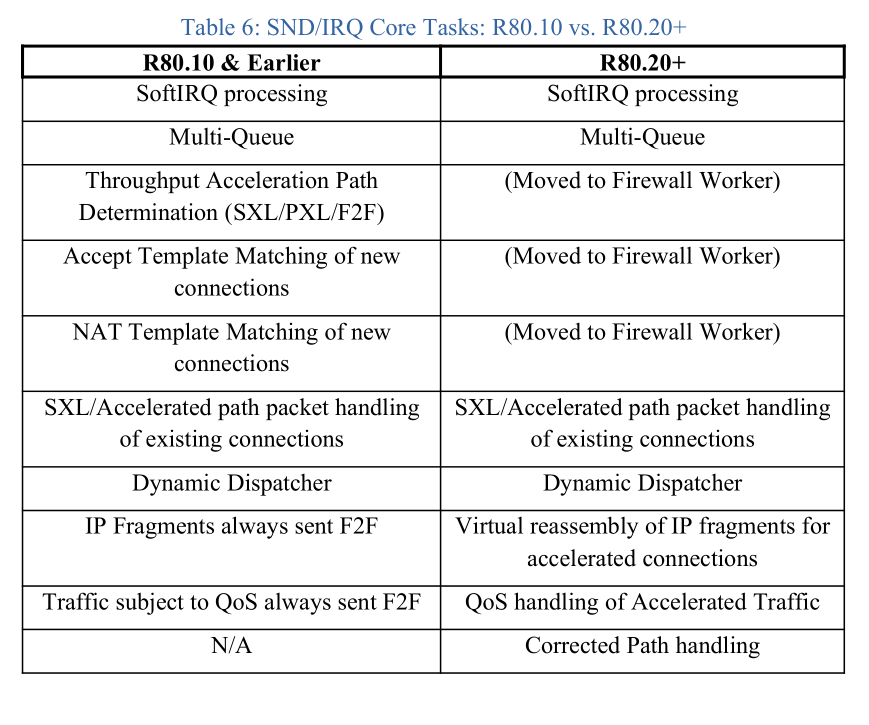 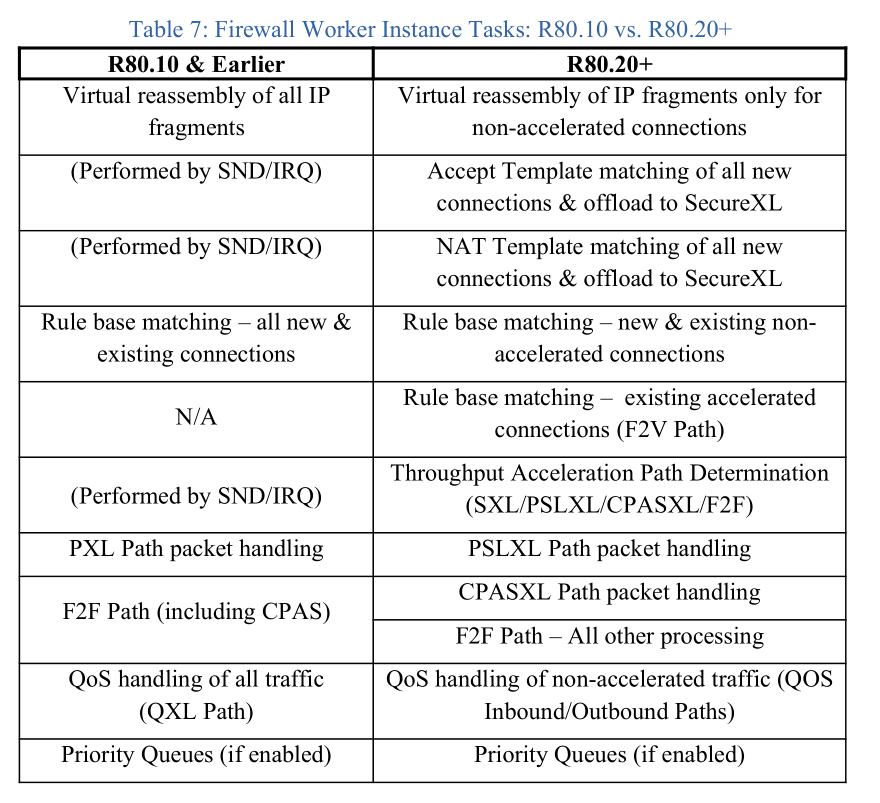 thanks for the detailed information.

Especially table 6 was exactly what I was looking for.

This confirms my feeling that we´ll need to re-revaluate our SND/fw_worker distribution setting.

PhoneBoy
Admin
In response to TomShanti
In R80.40, you’ll probably not want to mess with these settings as SND/worker distribution should happen dynamically.
However, if you manually adjust the settings, you lose the ability to leverage that.
1 Kudo
Reply
Share