Is there a way?

So now we are stuck in a hard place - we tell the people who need computers that they can't have them because our antivirus is incompatible - and end up with a bunch of people who are employed to do no work, or we deploy a bunch of machines with no antivirus. The only person who knows anything about Checkpoint is our I.T. manager, who is generally too busy to worry too much about antivirus software, so at this point we have had to take the decision to deploy a bunch of machines with no antivirus.

I have tried installing the version that I assume we need (82.10?), but it comes up and says 'no blades selected'

Surely it shouldn't be this hard. Isn't there some plain vanilla version of Checkpoint I can install that will at least protect our PCs until someone has time to do the other upgrades required to support this version?

What is the version of Management that you have deployed?

Thanks for that. All I can say is 'groan'. It's a bit unfair me taking out my frustration here, but this really isn't a good product to have to work with.

It would help if you could share the version info and what deployment rules are configured.

As of now it's difficult to determine if you just need a newer version of SmartConsole GUI client installed or something more.

Hi Chris, Sorry for my gloomy tone. I work for a local council and we are currently trying to merge with 3 other councils and create a new council......knowing who has responsibility for what is a major problem, and everyone seems to have bits and pieces of things that they are responsible for. The whole thing is a bit of a shirt-fight, and quite a depressing atmosphere to work in. I believe we are using R77.30 console client, and the desktop client is 80.82. As for what deployment rules are configured - I have had a look at the console once or twice and I cannot make hide-nor-hair of it. I used to administer McAfee and Sophos here over the years and they were quite logical and understandable without any training. Checkpoint just does my head in. I suppose it would help if I had had any sort of training - even an introductory 10 minute session, but I haven't had anything like that, so I have to rely on the only trained person here - the I.T. manager, and he has more important things to deal with than day to day operations of our antivirus

The E81.40 and higher SmartConsole client for R77.30.03 is available for download from sk163578 (Management Console Downloads section) (Newer versions may require a new client / management version in future especially for access to manage new features).

You can either launch SmartEndpoint directly or via SmartConsole, then navigate to the "Deployment" tab.

Right clicking on the actions column will allow you to choose/update the client package version & blades to deploy for a group. 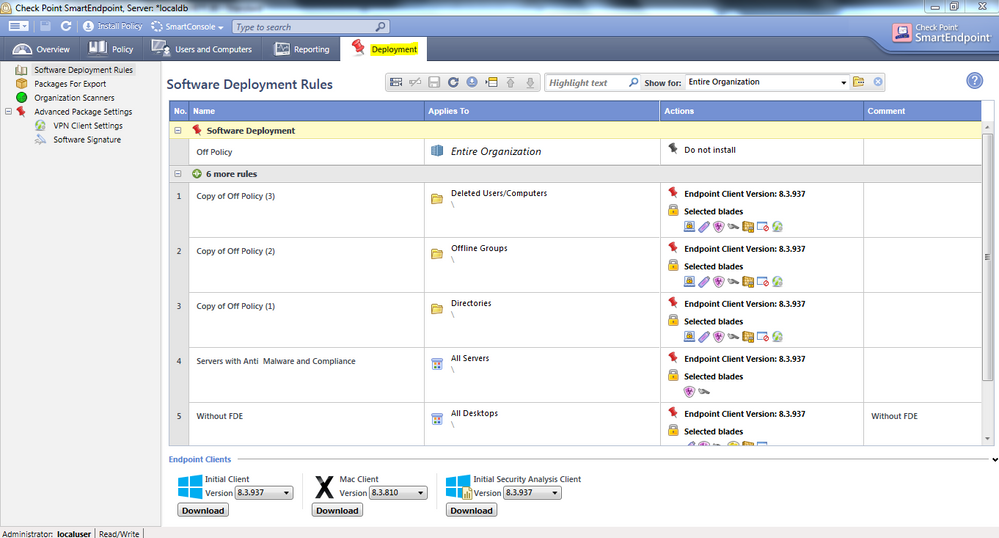 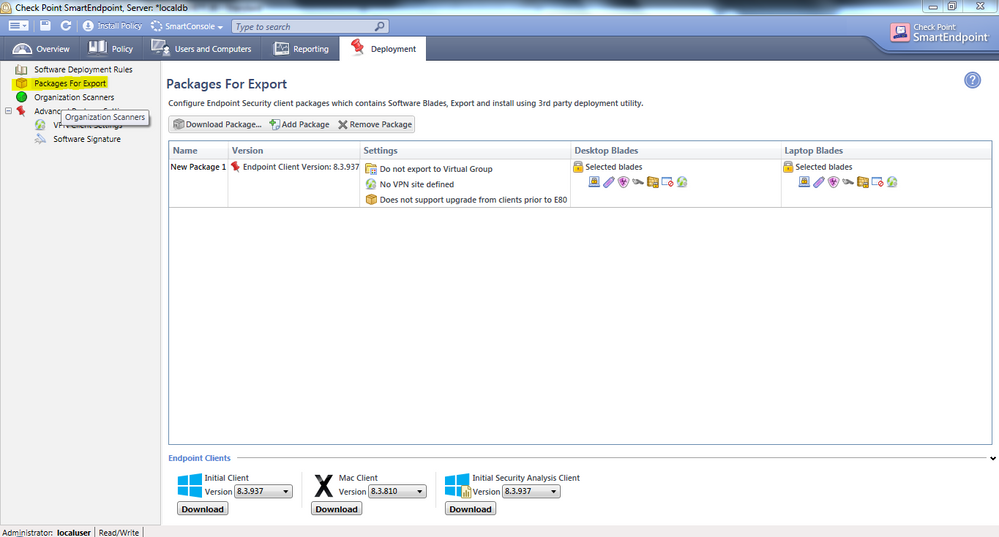 Thank you for your feedback, we have a good “How To” videos that you can watch and learn from.

sk164896 - How to deploy and upgrade the Endpoint Security Client:

The SK contains timestamp markers for each topic, so if you looking for just one of these operations you can jump to this point in the video without having to watch the entire thing.

Thanks for that. I will definitely check those out. I knew that we had a multi-server deployment of Checkpoint, but the I.T. manager has just pointed out a couple of things to me - first and foremost being that the server that I can connect to here is just a policy server, and I need to connect to the main server (sorry - can't remember the term he used) in one of our other offices to be able to do things like create a deployment package etc.

This would explain why it didn't seem to make a lot of sense to me.

Thanks all for your helpful replies. Much appreciated. I'm guessing that with a bit of understanding of how things work my frustration might ease a bit!

This is about my 100th attempt at writing this message. It's quite a battle to not write what I actually think, and to try to stay calm and objective......

I have downloaded and installed smart console by logging into the Gaia portal (as instructed by my boss).......but the smart console won't open because mfc100.dll isn't installed. So now not only do I have my original issue to deal with, but now I have to deal with a non-functional console......

I really can't hold my tongue any more........this is truly the most infuriating, horrible, productivity-killing hopeless piece of software I have ever had the misfortune to have to deal with. I hope this post acts as a cautionary tale to any poor sap who might be considering wasting money on this junk. I give up.

To support the latest Endpoint client versions you will need to download Smartconsole from our Support portal.

To install the new SmartConsole version you will first need to uninstall the previous version to avoid conflicts.

Thanks. Obviously I was getting the wrong version of the console. I know we have R77.30, but I have no idea what comes after the '.30' and even less idea how to find that info out. The fact that there are so many versions of the console that have to be matched to the correct version of the management server is a recipe for confusion - at least for simpletons like me.

But seriously......our installation has been in place for a few years now. I have had nothing to do with it for any of those years (apart from logging in to the console to have a bit of a look once or twice....realising I have no idea how it works and quickly logging out again), suddenly I find I am having to perform some sort of upgrade so that checkpoint will continue working with newer versions of Windows, and it is not very intuitive.

Oh well, at least I am one step closer. Thanks for your patience!

So I have installed the console. have started it up and pointed it at our management server (I think that's what its called). It has connected successfully, but when I click on 'Overview' apparently there's no security gateways on our network (the managers going to be annoyed - he has spent an awful lot of money on checkpoint products, and apparently we don't have any.....), I click on Policy and get a blank screen.....basically whatever I click on it shows that there is nothing. Obviously I have got the wrong console.......I assume? Just further illustrates my point that this software is so convoluted and frustrating

Apparently that's not the console I need....the IT manager found a few minutes to show me what he thought was the correct console (there's at least 6 versions stored on our network in various places, with no indication as to which one is the one to use)....I installed it, ran it, entered credentials and IP address, it has a think for a while and then just disappears! No error message, no nothing......just software that's there one minute and gone the next.

This is becoming a nightmare. I have literally spent my whole day on this and I still don't even have a working console.

I truly sorry that you had a bad start, and I would love to help you out.

Is it possible to have remote session?

Please send me a private message with your email address.

Thanks for your response. That's very decent of you, considering the horrible things I have said in my posts!! I have had to spend the day today recovering data off a failed server, tomorrow I have a day off, so I will get back to you on Friday, if I can - assuming we don't have any more urgent mini-disasters here. With the bushfires, and now the rain, things have been a bit weird for the last few weeks.....who knows what's going to happen next!

Anyway, thanks again, and I will get back to you on Friday.

Thank you for your feedback, Any feedback is more than welcome, we always trying to improve.

From this post (bushfires), I understand that you from Australia so I hope the crazy weather will calm down...

To everyone at Checkpoint and anyone else reading this, I would just like to apologise for the unsavoury tone of my posts. As you can probably tell, I was having an extremely bad week. That does not excuse my completely unacceptable conduct, so I would just like to apologise for any discomfort or offence I may have caused anyone. If you feel the need to remove this series of posts completely I would not have any complaint.....or you could leave it in place so any future visitors can see what a complete tosser (me) looks like.

I had a very helpful call from Dajana Brgic this morning and she cleared up all my issues as well as giving me a bit of a tutorial. She was very patient and helpful, which I really appreciated.

Once again, my sincere apologies for my completely unacceptable conduct.