I'm looking to share my experience and concerns regarding the current state of SSL Inspection in general and with Check Point, I'm also looking to see what is your approach in this matter.

Important: This post is strictly to Outbound SSL Inspection, my experience with inbound is limited with Check Point.

I'll start by making a vendor agnostic statement: One of the things that bothers me most about this subject is that there are many people that states that they have this technology implemented in their organizations and have no issues at all, after I met those organizations I found one of the following:

We all know the importance to inspect HTTPS traffic in our network due to visibility and security, but I times I feel like this way of thinking is my InfoSec persona speaking that only gives woo woo advices to the business regarding security and doesn't even know how to install an antivirus software. Why? Because properly implementing this solution is just painful. I also know that most customers don't even want to dive into this matter and prefer to lay this layer of security into their endpoint solutions, even if it's not the same I respect that.

Within our customers we have one in particular that is very tech savvy with a 900+ users and likes to turn on all the features in their NGFW and one of the requirements was to enable full outgoing ssl inspection in the Check Point firewall. We started with this customer years ago with R77.30 in gateways so you can imagine that I've been through all kinds of fun experiences with SSL Inspection.

During this journey we went through a lot of information, there are many awesome posts here in Check Mates, SKs, SRs with the TAC, you name it.

Issues that we faced

The following is a summarized list of issues that we had.

The issue with Check Point and Outbound SSL inspection

I really like Check Point firewalls, but sometimes I feel that they take control from the administrator. One of the first thing that we did was to disable all the options regarding dropping connections that don't follow the RFC line by line, allowing connections to not trusted certificates, we have tried it all, and still we faced a lot of issues.

Bypassing the connection? Good luck with that, Check Point firewalls always inspect the first packet and only by that there are many connections that fail.

Probe bypass to mitigate the previous issue? Sure, be prepared to have other issues due to SNI verification.

Fail open in probe bypass? This was a huge surprise after it was changed in Take 189, but we still had a lot of issues after enabling this flag.

WSTLSD debug? Many times, good luck not taking down the firewall with it and be prepared to wait a long time for the TAC to inspect it, not their fault, it's just really hard to troubleshoot these issues.

The only way that we found to properly bypass connections was to exclude it COMPLETELY from the SSL policy. Example: Let's say that you have two network segments and you only want to inspect traffic in one of them:

What most people do

In this example all traffic from 10.0.0.0 will be inspected, however you probably will have some issues in the 192.168.0.0 network as well since the bypass action enforces to inspect the first packet of the SSL Handshake.

Only way do nothing with the connections

In our research we found that the only way to properly bypass a connection was excluding it completely from the policy. Obviously this approach is not scalable and somewhat utopic in a big network.

The most stable scenario that we reached

We reached a state of stability in R80.10 with the JHF prior to 189 and by enabling the following flags and features:

Sophos antivirus worked fine, issues with web pages went down to a minimum.

We decided to migrate one of the cluster members to R80.30 to test the new SSL Inspection engine and to solve some issues that we had with UserCheck. After the deployment we had some issues regarding Proxy ARP:

Some Inspection Settings that started to cause issues in R80.30 and not previously.

We sorted them all and the first impression was just great:

The next day a waterfall of user complains started to appear:

At this point there were many issues impacting production, we blocked one hole and another 10 appeared. It was just impossible to properly troubleshoot each issue, we had no other option but to go back to our most stable version.

Our main concern now is the remote possibility that we will have to live for life in R80.10, we know that we will have to update sooner or later that's why no we are implementing a parallel CHKP Frontier such as we have our failback pfSense, this new gateway will have R80.30 with the same features, thing of it as a hybrid testing/production enviroment.

The main idea is to route certain subnets to the R80.30 gateway and study their behaviour and troubleshoot without all the user complaining.

Concerns regarding the current state of SSL Inspection

Hope this post helps you in implementing this feature in a harmless way.

Yes, in the history there were problems with the SSL interception. For example, SNI is only supported from version R80.30. For https inspection Check Point use CPAS. More info you can find in my article R80.x Security Gateway Architecture (Content Inspection). If you have performance problems with certain urls, please give us an example. In the first step I would upgrade everything to R80.30 to have SNI support and be able to use newer chipers.

Active Streaming (CPAS)  -  Check Point Active Streaming active streaming allow the changing of data, we play the role of “man in the middle”. CPAS breaks the connection into two parts using our own stack – this mean, we are responsible for all the stack work (dealing with options, retransmissions, timers etc.). An application is register to CPAS when a connection start and supply callbacks for event handler and read handler. Several protocols uses CPAS, for example: Client Authentication, VoIP (SIP, Skinny/SCCP, H.323, etc.), Data Leak Prevention (DLP) blade, Security Servers processes, etc. In some scenarios, HTTP is also using CPAS, when IPS Web Intelligence protections are enabled. As for now, CPAS doesn't support accelerated traffic, this mean that each CPAS packet will be F2F. 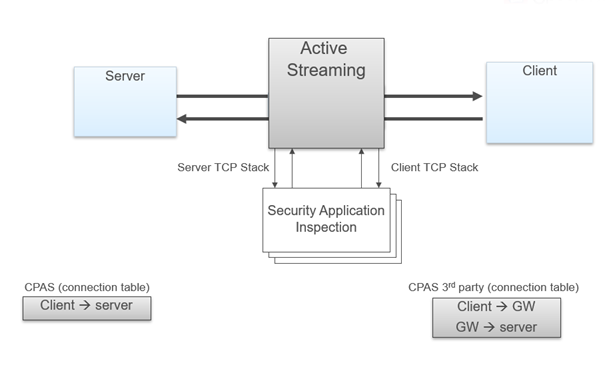 With PSL, connection that is encrypted with SSL (TLS) was not supported, the reason for this is that the encryption keys are known only to the Client and Server since they are the one that initiated the connection (preformed the SSL handshake), because of this we couldn’t get the data out of the packet and the application couldn’t scan it for malicious information. CPAS plays the rule of “man in the middle”, because of this, it can intercept the SSL handshake and change the keys so he will be able to understand the encryption. The Client preform an SSL handshake with the gateway (thinking it is the Server) while the Server preform SSL handshake with the gateway (thinking he is the Client). The gateway have both keys and he’s able to open the encryption, check the packet and re-encrypt the packet with the corresponding keys. In order to encrypt / decrypt the SSL connection, CPAS add another layer before the application queue. The new layer will send the packet to the SSL engine for decryption/encryption and then resume the normal flow.

Packets of SSL handshake are passed to the SSL engine to exchange keys. When the connection and the SSL handshake is fully established, an hook will be register for this connection to handle the decrypt / encrypt of the packets. When a packet arrive to CPAS, a trap will be sent and the SSL engine will receive the encrypted packet, decode the packet and return it to CPAS. The packet will enter the receive queue and the application will be able to work on it, once he done he will send it to the write queue. The packet will pass to the SSL engine for encryption and pass to the other side (Client, Server).

FedericoMeiners
Advisor
In response to HeikoAnkenbrand
Heiko,
Thanks for sharing, I've been through all your posts and your contributions are great.

I'm aware of how SSL Inspection works in a theorical level, however my point is how unreliable is to properly make exceptions:
If you are deploying a solution in a productive environment most of the time it's assumed that these kind of features will work out of the box and that they will require minor adjustments.

I know by experience that Check Point makes thing different than other vendors to favor security but you always have some tricks or settings to bypass these, some examples:
- During a migration from ASA to CHKP: After we deployed our firewall all VoIP phones stopped working, further troubleshooting indicated that there were some signatures in the Inspection Settings that saw SIP traffic as malformed, we removed all these protections and it just worked, You have clear ways to troubleshoot this.
- IPS: It's not secret that it's probably that after deploying IPS some services will be affected, but you can clearly troubleshoot this and make the exceptions.

Going back to SSL Inspection, implementing it without issues it's more luck than knowledge and skill, even more if we consider that there are no ways to properly bypass traffic: It doesn't matter if you set it to fail open or set to not drop revoked certificates/untrusted, issues still will appear for the end users.

Thank you for sharing 🙂

Just wanted to share with you that today I confirmed with Check Point that in R80.30 the probe bypass feature doesn't work anymore.

I suspected this since the new SSL engine has another inspection method, the main purpose to enable these flags prior R80.30 was to solve some connections issues with various applications. However, take for example the installation process of the Sophos Antivirus, prior R80.30 we could make it work with these flags, but in the latest version we can't find a way to make it work.

If you are using probe bypass I strongly advice to test your company applications that need it in a parallel R80.30 gateway before upgrading.

Thank you for reading,

_Val_
Admin
In response to FedericoMeiners

Very nice write-up, I appreciate your efforts to write this down.

It's good to see that we are not the only one with these problems. we upgraded to R80.20 and had huge problems. we were not able to login to any website anymore. This problem got fixed. but we still have problem with many sites which we now had to bypass.

after all these problems we decided to evaluate an alternative proxy solution.

This sounds quite familiar to the issues encountered.

Keep up the good write-ups!