I have come across a strange situation where my packets are both Accepted and Dropped at the same time. Can anyone help me determine what is the real outcome ?

*Picture was unclear.Updated to clearly see policy has Drop*: 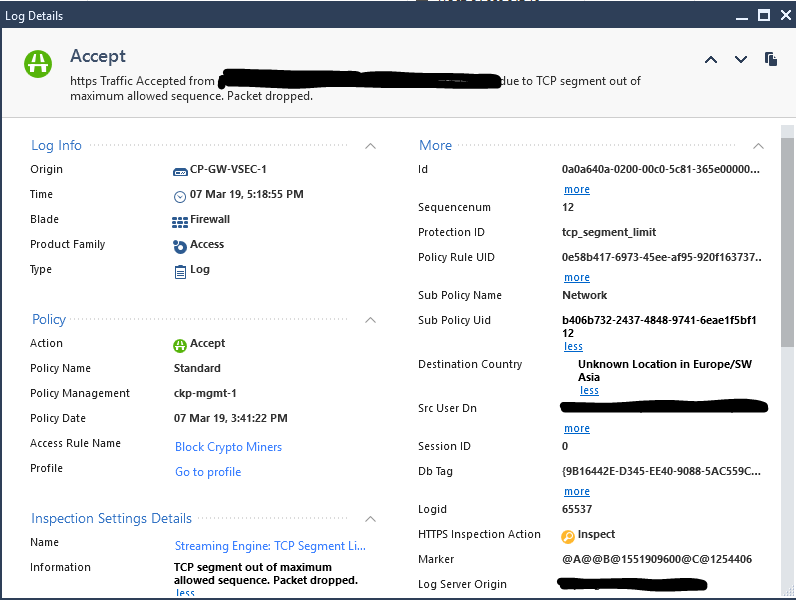 Description of the event:

https Traffic Accepted from <USER NAME> (<username>)(<internal_ip>) to 2.17.117.112 due to TCP segment out of maximum allowed sequence. Packet dropped.

Knowing that i found the packet that is simultaneously both accepted and dropped - I will just leave this here for reference:

What i can see is that your Access Rule "Block Crypto Miners" does accept the packet, then it is dropped by IPS Sanity checks ! Maybe sk122072: 'TCP out of Sequence' logs in SmartView Tracker can help ?

My mistake - the rule is configured to DROP but this was not clear in the first picture. I corrected. 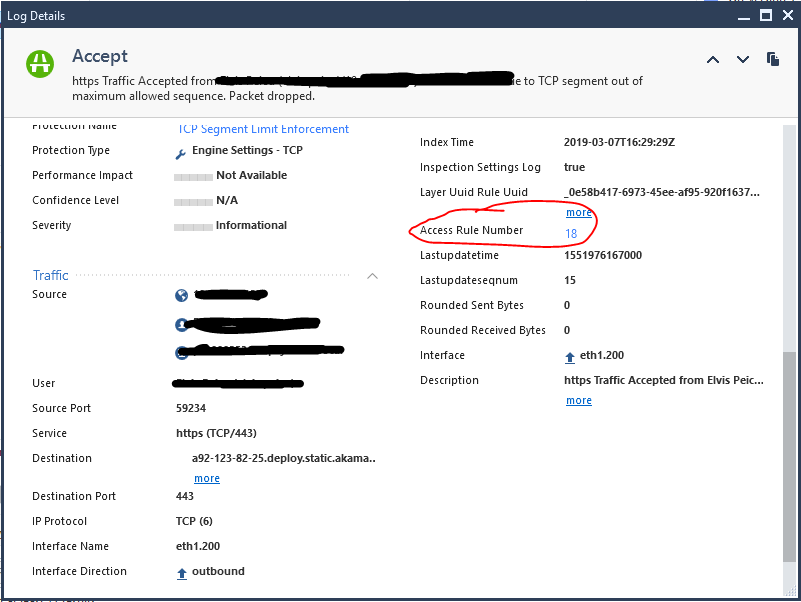 It is accepted by policy but it is dropped by IPS. Are you getting this message continuously or for specific time. One of the reason is high memory usage as well.

Why is it accepted by the policy when the action on the rule is Drop?

The main thing is that it is dropped by IPS - i would start from there ...

I can agree that apps can only be detected and classified ONLY after allowing the connection to be initiated.

Does this mean that the unified policy is misleading? Yes

Does this mean that this traffic is passed through the next firewall rules? I don't know

My customer is asking me to advise on how to build the ruleset considering that his rules are "avoided". I would agree that if there is an explicit drop, i would much appreciate not seeing any kind of log saying it was allowed as this creates confusion. Especially If the Firewall is claiming my rule 18 matched this traffic -

The only supposition i have is that because it's somehow fragmented it cannot be inspected... but still it is accepted and on a rule with Coinhive.

The other perculiar thing is that on the same rule i have both this example https traffic and SMTP traffic.

I would involve TAC - although i would suggest that an Accept here just means that this rule did not match, as then it would drop the packet instead. The message is from IPS, so that is the key here !

Is this for any specific traffic?

Exactly the same suggestion was given by TAC. After reading the SKs i can see that setting this protection to Detect makes it be bypassed by other IPS protections.

However my issue is with the log stating Accept. Is this passed to the next rule or simply allowed?

1. I am updating with more information. I have tested this signature on different setup, everything works. This means that the app "Coinhive" itself has no issue.

Unrelated Note: The new interface for Check Mates makes editing a complicated mess. It was much better before. Hope it was worth it. I just noticed while trying to make this post. You can't even paste pictures anymore. Let alone "quote" text.

Makes me think it now looks awfully aligned with the new Support Interface. Not everything is supposed to be a feed, sometimes i would like to be able to track my cases by just scrolling down, not having replies in my SR's arranged by "relevance" and "likes". Somebody actually hired some PR/Marketing guys to keep shifting interfaces around?!

PhoneBoy
Admin
In response to cezar_varlan1
There should be a "quote" button on the right side of the toolbar. I'll see if we can enable pasting photos into the editor as, I agree, that is quite useful 🙂
0 Kudos
Reply
Share