I need some idea on attached Topology to achieve. Anyone can help me on this please.

7) Requirement is:
a) Traffic from Peer-side to reach AzureVPNGW thru S2S-Tunnel.
b) Then AzureVPNGW should forward this traffic to VMSS for Inspection.
c) After Inspection, VMSS should in-turn route the traffic to Internal WebServer.

f) When packet from PeerServer leaves their localGW, it got encrypted
g) But don't see this packet in VMSS (Unable to check in AzureVPNGW)
h) But Webserver sends reply packets towards VMSS for this Inbounded traffic.
i) Looks like AzureVPNGW routes the Inbound traffic directly to WebServer and not to VMSS for inspection.

Either way traffic not reaching each other.

Any ideas on how can I achieve this. 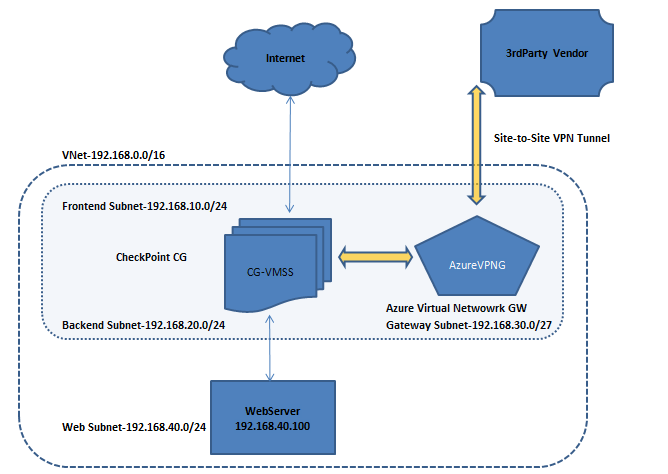 did you try to define a UDR (User Defined Route) attached to your Azure VPN Gateway subnet, to route traffic for your WebServer to your VMSS ?

We can use UDR apply to the Azure Gateway subnet to route traffic to the VMSS for inspection, but pay attention, you should have: