S2S VPN setup on a 5400 cluster with multiple external interfaces

I have a cluster with more external interfaces, two interfaces are Internet peers and third external interface is connected to telecom MPLS service. I am trying do do S2S VPN setup from MPLS interface towards the remote Sophos Cyberoam device. Anyway, my tunnel is not coming UP although I checked all VPN parameters, I am suspecting it has something to do with this strange IKE behavior.  Other end device is Sophos Cyberoam device and it reports error message that we are using wrong PeerID, it sees our main Internet interface address as our PeerID instead of our MPLS interface address.

MladenAntesevic
Contributor
In response to PhoneBoy
Jump to solution

I do not have exact information about the other end of VPN, it is a Sophos Cyberoam device, I will try to get more detail information since it is a device from other organization.

Link Selection is left as default, I am sending screenshot with my settings. I have declared other end VPN gateway as interoperable device and it has the same Link selection settings.

Wolfgang
Leader
In response to MladenAntesevic
Jump to solution

do a tcpdump/cppcap on your third external interface (MPLS) and have a look at the source and destination IPs of your IPSEC packets.

MladenAntesevic
Contributor
In response to Wolfgang
Jump to solution

I just have check it with tcpdump and everything is fine, I am sending and receiving ISAKMP IKE packets with correct source/destination address.

I am editing this reply, so to be more precise, src/dst IP address of our IKE message is fine, but inside the IKE MM5 message we have our PeerID set to wrong address, so instead of our MPLS interface, we have our Main Public Internet address set as a PeerID.

I see IKE Phase 1 is establishing, something is wrong with the Phase 2. I will try to verify the networks with the remote end administrator.

I am editing this reply, even Phase 1 is not establishing since PeerID address is set to wrong address. 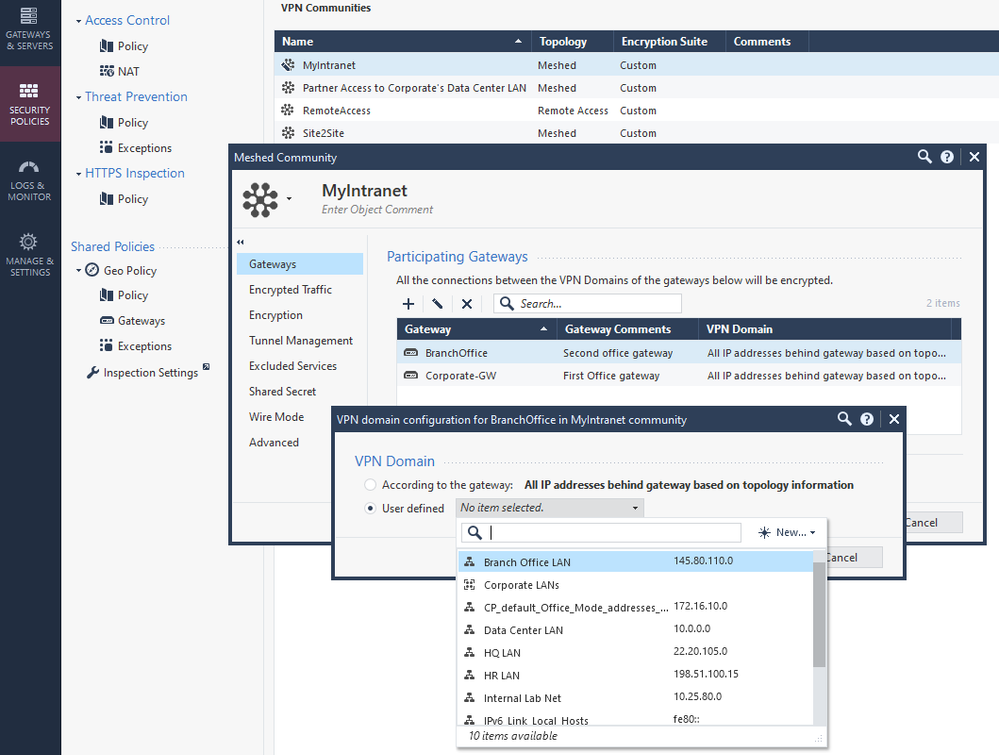 Thanks for your advice. I have now arranged with remote administrator to do first setup with just one network on each side and I have configured VPN domains accordingly. I believe the problem is because remote device sees my public IP address as Peer ID instead of my private IP address from interface towards MPLS link.

Right, you need to change VPN Link Selection from "Always use this address" to "Calculate IP based on network topology" to ensure your firewall uses the correct source address.  Making this change should not disrupt your existing Internet VPNs but you may want to make the change outside regular business hours, and immediately reset all Site-To-Site VPNs with vpn tu (option 0) to ensure they will come back properly with the new setting.

I have done it just as you described, followed by resetting all VPNS, but my problematic VPN is still down. I have noticed one interesting thing, I have declared 192.168.70.21/32 as my local network, as you described above, but when I list the tunnels with the vpn tu tlist command, it is showing the complete subnet 192.168.70.0/24 as a local TS, which is very strange, here it is:

One more fact to know, we are using L2 MPLS service, so remote Sophos Cyberoam device IP address is in the same subnet as our MPLS interface address. Is there any option to set our PeerID to address of outgoing interface during the Phase1 IKE negotiation.

excellent, this was very valuable information for us, after appending SenderIP into gateways registry our tunnel went UP. Seems that remote Cyberoam device is checking value of this field in order to do key install. Thank you very much for your help.