We are very excited to share that HyperFlow Early Available program is now open for registration.

In today’s fast changing environment, with a growing demand to address different traffic volumes per connection, HyperFlow is designed to automatically tackle such challenges.

See it in action - Demo & Overview of the new advancements:

HyperFlow EA is mainly for NGTP customers with appliance models of 8 cores and above.
Customer’s benefits:

But I see some caveats here.

the_rock
Legend
In response to genisis__

Thats good point, for sure...sometimes, as crazy as it sounds, but 8 cores might not be enough to solve elephant flows problem.

This is a solution in search of a problem (that doesn't exist).

If they honor DSCP PHB like they should, as per RFC-4594, then downstream devices can mark exceeding packets as CS1 and then FloodGate can just rate that at 10mbps.  Deal with the problem at the source, like RFC-4594 says.  "Mark as close to the source as possible".  Likewise, if a clever user tries to mark their packets as EF, that's a problem best-handled by the downstream switches.  They should be remarking incoming frames absolutely and not trust DSCP or CoS.

If the topology table already considers non-external interfaces as "trusted", then what's the problem?  Are those interfaces trusted or not?  "External" topology interfaces should have the option to trust DSCP or not (default to untrusted, but give the option to trust; there's a LOT more DSCP on the network than one may realize, including ECN, and it works).  Seems like Check Point is not honoring RFC-4594.

_Val_
Admin
In response to Duane_Toler

Are you sure you are responding to the right thread? Does not look like it.

HyperFlow boosts elephant flow by processing it on multiple cores in parallel, a minimum of 8 cores is required to allow optimal resource management of the system.

Is / will VSX be supported aswell?

awesome! will it require 8 vs instances or how is it "enabled" when it comes to VSX?

The requirement in VSX is 6 FWK cores, not instances

When you say 8 cores, do you mean 8 worker cores?  If so, this in affect would mean an appliance/openserver with more then 8 cores is required as clearly SND cores would need to be factored in.  This would then imply that we would require a minimum 10 cores, including SNDs.

So absolutely this is great milestone, but we are talking highend appliances could realistically benefit from this.

The assumption is way too liberal. 😀

Similar to Dynamic Balancing, HyperFlow can be available with 8 or more cores, as @Chen_Muchtar already mentioned

genisis__
Advisor
In response to _Val_

Will checkpoint plan to address this on lower end appliances?  In most cases people would have 52, 62, 64 or even 6600 appliances where elephant flows are more likely to be seen (again making an assumption here).

All with 8 or more CPUs. I actually misread your statement and thought you were talking about SP series.

the_rock
Legend
In response to genisis__

Not an assumption, seen it happen before. Though, not too often, but does happen.

_Val_
Admin
In response to the_rock

Regardless of amount of CPUs, we consider an elephant flow a.k.a. a heavy connection when:

As an example, for a single FWK instance, if it runs 60% of utilization, one single connection should be taking 30% or more. The "classic" cases are: DB replication, backups, VM migrations, and other data transfers between one source and one destination IPs.

The first condition of overall 60% CPU utilization is indeed more common to the situations where your appliance already is running high CPUs. However, you can also have that situation happening on a machine with many cores, where just one of them is too busy, and others are mostly idle. The recent example from today's community thread is here.

Just a few cores, or many of them, one specific FWK is suffering from a massive data transfer all the same. Before HyperFlow, we had Priority Queues and fast_access to work those issues around, now can leverage multiple CPUs for a single connection. With is, in my book, HUGE.

Very nice, been a long road of development for this one!

This is great news and a welcome feature for some of our customers.

Chen_Muchtar
Employee
In response to Martijn

We have been waiting for this for a long time;-)

This leads me to ask if CPAS (Active Streaming) and security blade/malware detection is handled with Hyperflow?

I currently have a customer that shows zdebug drops when trying to download very large files. TAC case in progress.

PPE worker is capable to process hash of large files for AV blade in order to detect malware.

If CPAS is active over heavy connection supported by HyperFlow, and AV blade is enabled, the Hash calculation will be performed by PPE.

Tom - feel free to contact me offline @ chenmu@checkpoint.com to review your customer env. for this matter

Streaming and blade logic layer is still being handled by the FW instance owning the connection.

-      Once the last job is done, a message is sent to FW, notifying that the DPI processing has been completed, allowing it to continue to outbound processing

o    For example, multiple PM jobs of different buffers of the same connection can run concurrently on different PPE workers 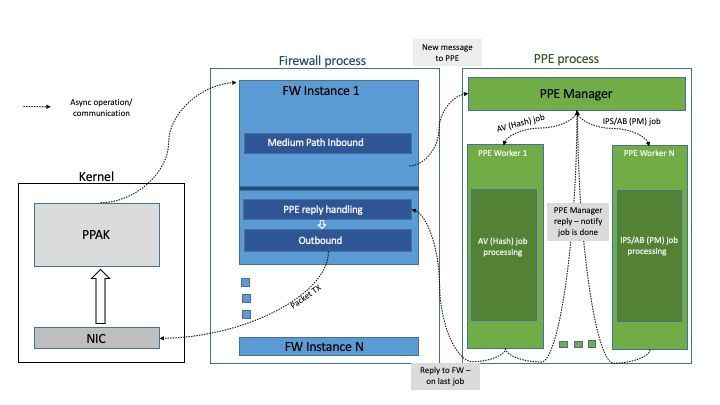 Regarding FW monitor, it is a networking focused tool (output can be parsed by wireshark, for example), as such, it is built to work with packets as a whole.
Since HyperFlow works at the parser level, which dissects the TCP data into different segments, it uses other monitoring tools, such as connection tracker.

What setup? HyperFlow, similar to Dynamic Balancing, is automated, and works out of the box with 8 or more cores.

Thanks for the detailed description.
👍

Does this feature support Jumbo Frame?