Is there a way to disable/enable Anti-spoofing globally on a security gateway rather than doing it specifically on each and every interface? R80.10

Yes, there is. Just install our ccc script and select the specific option within the Firewall Gateway menu.

motiami
Contributor
In response to Danny

Should this script install on each gateway or only on the management server?

Danny
Champion
In response to motiami

Install it on each gateway. Additionally you can also install it on your management for the management functions it offers. Keep in mind that changing the Anti-spoofing this way might not survive reboots out-of-the-box.

motiami
Contributor
In response to Danny

I have installed it on one of our gateways Clusters , run this command on both Cluster members from the script and installed policy but still, I can see Anti-spoofing logs

Am I missing something?

For R80.10 and earlier the commands to disable anti-spoofing "on the fly" are:

Because you were missing the sim feature command SecureXL was still enforcing antispoofing.

For R80.20 Jumbo HFA Take 103+ and R80.30 Jumbo HFA Take 71+, the following is taken from the third edition of my book; this topic is not directly related to performance but I felt it was important enough to cover due to the dire consequences of making a mistake:

Antispoofing ensures that traffic is flowing the “correct” way through the firewall,
based on the packet’s source IP address upon ingress to the firewall, and the packet’s
destination IP address upon egress of the firewall. Antispoofing is a separate
enforcement mechanism that is consulted long before any policy layers. Based on the
recommendations in this chapter, you may need to make firewall topology adjustments to
ensure traffic is being inspected efficiently by the firewall. Antispoofing relies heavily
on the firewall’s topology definitions for proper enforcement. If you are not familiar
with the antispoofing feature or its ramifications, I’d strongly recommend checking out
the CheckMates post located here: A Primer on Anti-Spoofing.

Note that in R80.20 or later firewalls a new dynamic option for calculating
antispoofing topology for an interface has been introduced, called “Network defined by
routes”: 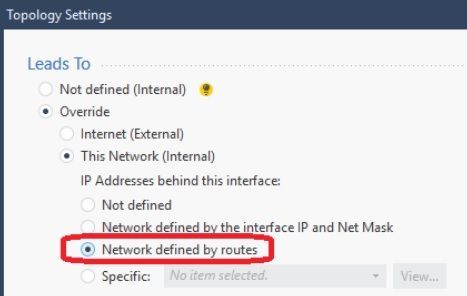 When selected this option will automatically define the topology for the interface
based on all directly-connected, static, and dynamic routes referencing that interface. So
therefore if any antispoofing issues are encountered, the actual problem is probably a
missing route which can be much easier to troubleshoot.

If you have inherited an existing firewall deployment, or are otherwise unfamiliar
with its network topology configuration, making sense of the firewall’s defined topology
from the SmartConsole GUI can be difficult. Nested network groups, a separate screen
for every interface, and a multitude of anti-spoofing related settings for each individual
interface can make forming a mental picture of your network and its topology a truly
daunting task. To make things even more difficult, the firewall’s topology cannot be
easily viewed from the Management CLI/API interface either.

However CheckMates user Danny Jung has created a special CLI tool called “One-
liner for Address Spoofing Troubleshooting” (which won an award for 2019 CheckMates
Code Hub Contribution of the Year) that provides a no-nonsense, text-based dump of the
firewall’s topology and associated antispoofing settings from the CLI. Not only is this
tool useful for troubleshooting antispoofing problems, but is great for figuring out the
actual working topology of your firewall. The tool is located at CheckMates here: One-
liner for Address Spoofing Troubleshooting.

Should you find yourself cut off from managing or installing policy to the firewall
due to misconfigured anti-spoofing enforcement, run these expert mode commands on a
R80.30 Jumbo HFA Take 71+ firewall to disable antispoofing “on the fly”, and recover
the ability to install a corrected policy (the second line assumes that SecureXL is
currently enabled on the firewall):