Hi, My Security Gateway CPU is spiking randomly. I want to configure a script to collect output of some pre-defined commands like EEM in Cisco. But I'm not getting the script for CheckPoint. Any help much appreciated

Checkpoint  is based on redhat Linux. you can create python  or bash scripts  to collect the information.

Thanks for replying. I want to set up a script which will execute a command "fw tab -t connections -u > /var/log/Connections_Table.txt" when my gateway CPU goes above 90%. Could you please help me with script and steps?

PhoneBoy
Admin
In response to Pavan_Kumar

You'd have to write a script that:

1. Monitors CPU (remember: there is more than one core)

2. When CPU reaches your desired threshhold, run the appropriate commands

Meanwhile, you might try using cpview, which can tell you a lot about what's going on.

Pavan_Kumar
Participant
In response to PhoneBoy

Its happening randomly, that's why I thought of configuring script. But, I don't know how to do. If you have any document or document related to scripting, please share. It will be helpful.

PhoneBoy
Admin
In response to Pavan_Kumar

cpview has a history mode that will likely be helpful.

Houssameddine_1
Collaborator
In response to PhoneBoy

Cpview will record the information, I believe every 1 mint. I have seen it before the cpu spikes in sub seconds and  cpview will not catch it. we had to use top with lower timer to catch it.

PhoneBoy
Admin
In response to Houssameddine_1

It's not fullproof, true, but it's a good starting point that doesn't involve writing scripts.

Houssameddine Zeghlache in regards to the granularity of cpview history mode being 1 minute, I looked into it more closely when researching my book and the per-minute historical numbers reported by cpview are the average of two samples taken 30 seconds apart.  So a spike of some kind that occurs but is not still happening during one of the samples taken every 30 seconds will not show up at all in cpview's history mode, and this was noted in my book.  Sar takes more of a running average over its sampling intervals and is some cases is preferred over cpview depending on what you want to inspect.  Here is the table from the second edition of my book where these preferences are summarized, these are just my opinion of course: 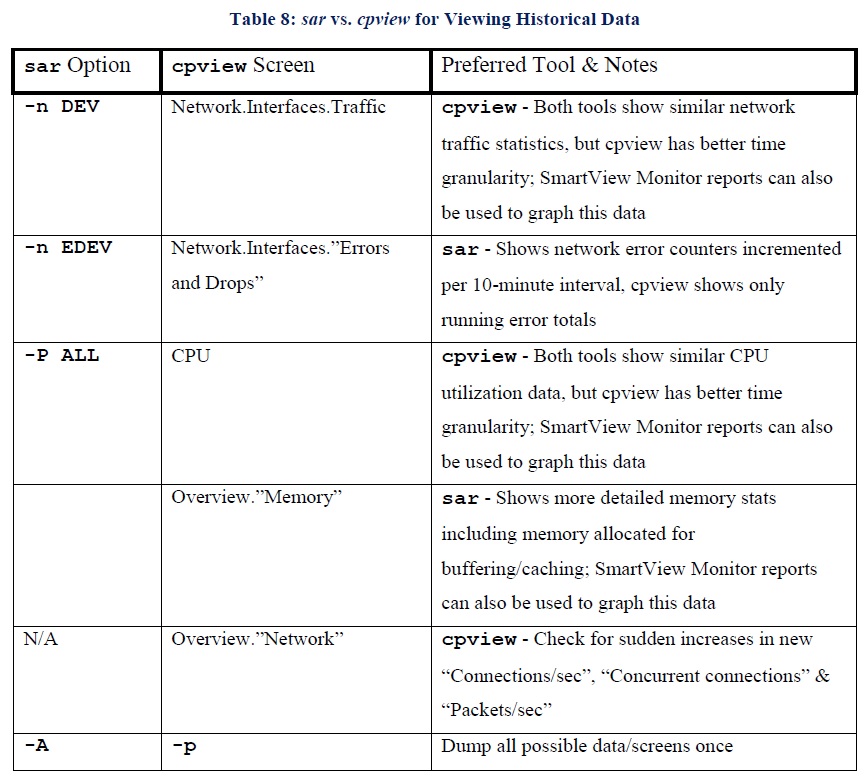 Hi Tim, In my case CPU is spiking intermittently and by the time I login it will became normal. I know one thing, the CPU is spiking when the no. of connection is increasing suddenly from 40k to 80k.

I'm stuck here, I want to find out what are these connections which is causing CPU spike. Could you please help me out?

Tim, forgot to say one more thing, firewall policy logs are disabled for all policy except clean up rule.

OK since logging is only for cleanup it is probably not fwd and its associated logging functions spiking the CPU.

First order of business for a spiking CPU is determine what kind of execution is eating the most cycles during the problematic period.  sar can get you going in the right direction here, run sar in historical mode like this (assume that the day number it happened was 7 in this example, for today just omit the "-f (filename)" argument):

This will show where specifically the CPU percentage-wise for each type of execution, namely:

%user - process execution, generally this should be fairly low on a gateway unless features that cause process space trips such as HTTPS Inspection are turned on

%nice - irrelevant on a gateway, important on a R80+ SMS though

%system - kernel execution, roll up of the sy/si/hi/st shown in top

%iowait - waiting for I/O, should be very low (<5%) on a gateway unless policy is currently being installed, if higher than that during your spikes the firewall is almost certainly low on memory, post output of free -m

Please report where most of the CPU cycles are going during the spikes and we can go from there.  If it is spiking in %system as shown by sar, you're going to either have to catch the problem live while running top, or run top in batch mode so we can see which one of sy/si/hi is the culprit.

I have an old, outdated script from years ago

Usage: Before running the script please setup top so it always show all CPU's;

The script will now run in the background and will take specific outputs related to performance every 30 seconds.
They will be written into /var/log/output.txt

You can change the time value to your needs.

But best would be to ask CP TAC for the CPU spike monitor script "spike_monitor_cpk.sh" by Ariel L. Dor