In the ClusterXL Admin Guide it states when utilizing Link Aggregation "To get the best performance, use static affinity for Link Aggregation", where it shows and recommends examples where you set the affinities for the bond interfaces to different cores.  This makes sense to  me as you would not want a LACP bond to have the slave interfaces pinned to the same cpu core.  Example below:

However with Multi-Queue various documentation states NOT to manually set affinities as it will cause performances issues. 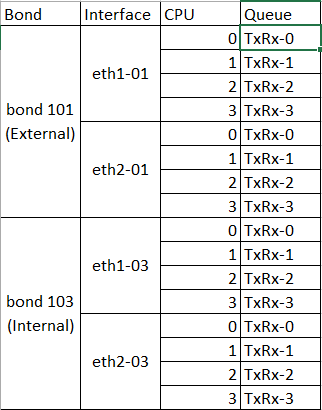 Multi-Queue does not directly care about bond/aggregate interfaces, it is simply enabled on the underlying physical interfaces.  MQ simply allows all SND/IRQ cores (up to certain limits) to have their own queues for an enabled interface that they empty independently.  The packets associated with a single connection are always "stuck" to the same queue/core every time to avoid out of order delivery, and I assume there is some kind of balancing performed for new connections among the queues for a particular interface.  You would most definitely NOT want any kind of static interface affinities defined on an interface with Multi-Queue enabled, as doing so would interfere with the Multi-Queue sticking/balancing mechanism.  The likely result would be overloading of individual SND/IRQ cores, and even possibly out-of-order packet delivery which is very undesirable.

It is an acceleration feature that lets you assign more than one packet queue and CPU to an interface.