Static Packet Filtering (SPF) is a method to control network access by checking the IP header of a packet and comparing its data with an access list, which contains access restrictions and allowances.  Practically any UNIX, BSD, or Linux machine is capable of performing this function natively.  With SPF, the security decision is made by the kernel’s IP stack in conjunction with an IP forwarding decision.  This function is always performed on a per packet basis.

Static Packet Filtering is incapable of enforcing anything more complex than just a simple verification of Layers 3 and 4 parameters, such as IP addresses and sometimes port numbers.  It also has performance drawbacks, as the security decision has to be made for every forwarded or discarded IP packet.  On the other hand, since this security function is quite simple, the OS kernel is capable of performing it without any extra help. 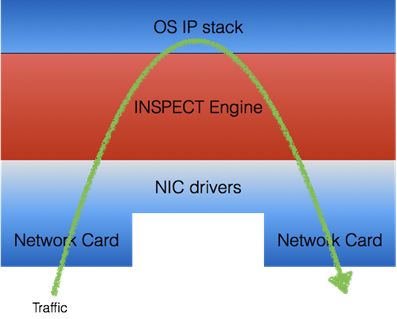 The INSPECT Engine deals with so-called “connections” and not with separate packets. It also deals effectively with complex protocols, such as FTP, VoIP, and streaming.  From the INSPECT Engine’s perspective, a single rulebase match may include multiple communication flows in both directions.  For example, an FTP session includes an initial client-to-server TCP connection on port 21, and also multiple client-to-server or server-to-client connections for transferring files, using various ports, depending on whether FTP passive or active mode is used.

Representing network traffic as connections instead of as a collection of independent IP packets requires some additional technological means.  The INSPECT Engine uses Dynamic State Tables to keep records of all accepted connections and their protocols’ state.  For example, if a single TCP session is allowed by a security policy, the INSPECT Engine will make sure that the TCP 3-way handshake is properly completed by allowing only a sequence of SYN, SYN-ACK, and ACK packets (in that precise order) between a client and a server at the beginning of a communication session.  After the TCP handshake completes, the enforcement engine will correlate sequence numbers with a pre-set TCP window size to enforce the state of the connection.  The INSPECT Engine will also respect idle timeouts and other RFC-based parameters for each networking protocol.  Any change in the connection state will result in changes to the Dynamic State Tables’ records.

Let’s see how Check Point policy enforcement works.  To do so, we need to recall how a security policy rule looks in the Check Point rulebase.

All policy rules have Source, Destination, and Network Services columns.  These three columns describe allowed or restricted traffic.  The Action column defines a security decision for the matched traffic.  It can be Accept, Drop or Reject.  We assume the readers of this paper already have some basic understanding of security policies.  If you are new to Check Point environment, we advise you to refer to Check Point Security Administration course offered by a Check Point Authorized Training Center (ATC) for more details. 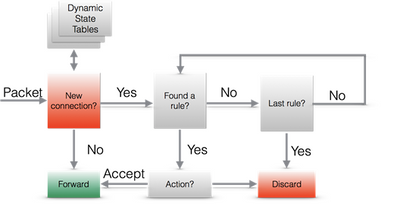 Stateful Inspection improves the performance outcome for a security decision.  In the case of an accepted connection, only the first packet requires a rulebase lookup.  The rest of the packet flow within an accepted connection only needs state table verification.  This approach is much more effective than SPF which requires making a security decision separately for each IP packet of the traffic.

Nevertheless, if the connection is not accepted, every subsequent packet associated with the connection attempt (including retransmissions) must be matched to a Drop rule in the rulebase, even in case of Check Point Stateful Inspection is in use.

Check Point’s Software Blade Architecture term needs to be explained from two different points of view: technology and licensing.  From a technology standpoint, the term “Software Blade” is interchangeable with a more common term: “a feature”.  Arguably, there is no technological or even architectural change in the Check Point products that would justify use of the term “blade” from a functionality perspective.  We will be using Software Blade terminology in the CPUG Papers in regards to security features, only because Check Point is using it in the product documentation, online help, and marketing papers.

However, the licensing model for Software Blades is quite different from any other previous Check Point licensing models, and in that discourse, the “Blade” term does demonstrate a particular value.

[1]  More details about stateful Inspection functionalities in regards to OSI model can be found in Check Point’s technical documentation.  Some external sources consider Stateful Inspection’s capabilities to be limited up to Layer 6, not 7.  The confusion is probably caused by different interpretations of the OSI model itself and not by misrepresentation of Stateful Inspection technology.  For example, HTTP and FTP are considered to be part of Layer 6 or Layer 7 of OSI, according to different authors and schools of thought.  In this paper, we are sticking to the Check Point's view on the matter.  However, it is important to point out that some other authors and security vendors may use different methods of OSI networking model representation.

[3] This is true even in the case of CoreXL, where each CPU core has its own set of connections to handle.

Static Packet Filtering (SPF) is a method to control network access by checking the IP header of a packet and comparing its data with an access list, which contains access restrictions and allowances.  Practically any UNIX, BSD, or Linux machine is capable of performing this function natively.  With SPF, the security decision is made by the kernel’s IP stack in conjunction with an IP forwarding decision.  This function is always performed on a per packet basis.

Static Packet Filtering is incapable of enforcing anything more complex than just a simple verification of Layers 3 and 4 parameters, such as IP addresses and sometimes port numbers.  It also has performance drawbacks, as the security decision has to be made for every forward