I am trying to use ansible with Red Hat Enterprise server 8 for a customer. The Playbook created works fine, However i get warnings like the one shown below. 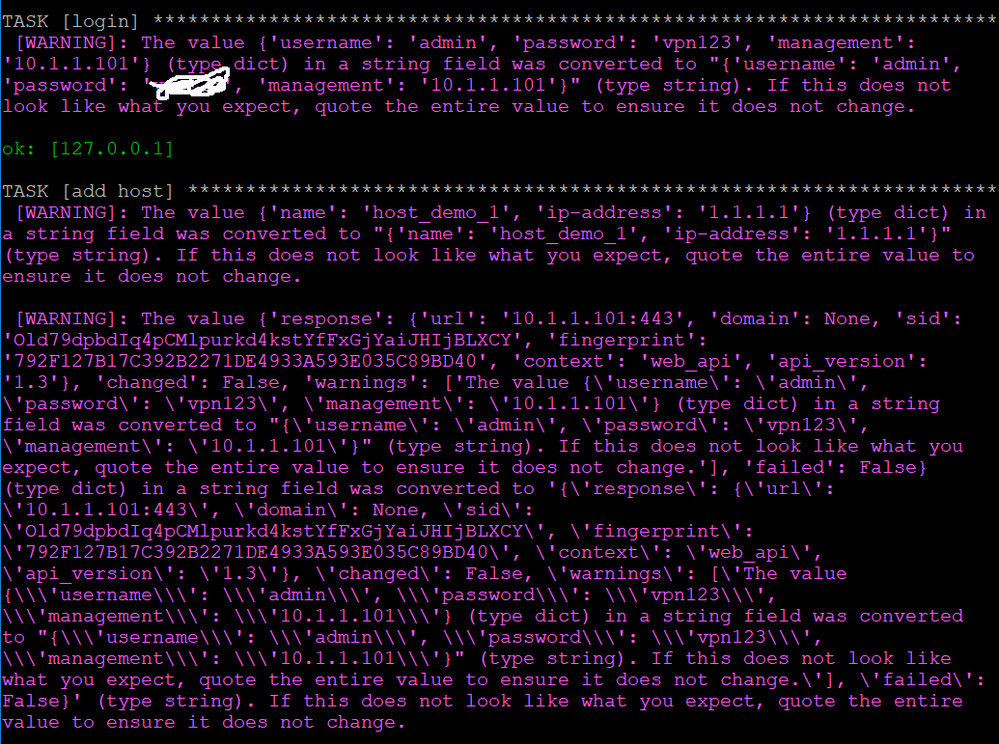 I can login to the management server and the objects.

Any workarounds or solutions for this?

The warning message you get seems to be because the parameters you wrote for your login command in the playbook is interpreted by the YAML parser as a dictionary, rather than as a string.

I guess that later when Ansible tries to pass the parameters specified in the task to the check_point_mgmt module, since the parameters in the login command is defined as a dictionary, it converts the dictionary to a string and this generates the warning.

Can you try to format your login command like we do in the example on our the cpAnsible GitHub repository to something like this:

I am getting the same warning after updating to the latest check_point_mgmt module from github.

It seems like it is not the updated module after all.
Thanks to @Ryan_Darst for pointing this out to me, there seems to be a behaviour changes in ansible 2.8 and later.

This behavior can be changed to be an error or to be ignored by setting the ANSIBLE_STRING_CONVERSION_ACTION environment variable, or by setting the string_conversion_action configuration in the defaults section of ansible.cfg.

You can add the following the defaults section of ~/.ansible.cfg or /etc/ansible/ansible.cfg

This is the result I get after adding that to my ~/.ansible.cfg

Please note that R&D is currently working on an official (by default included) module for ansible where this should be addressed.