Does someone meet performance issue after upgrade to R80.40?

At my 2 customers I faced out the same performance issue when I upgraded the cluster from R80.xx to R80.40 last take.

For both I had to downgrade to the previous version because critical environments where I cannot wait for TAC investigation.

this is the reason why I'm sharing my findings

In both cases I see the active cluster member suddenly has more CPUs 100% usage.

When it happens the gateway is unresponsive and the TOP output shows high usage for "watchdog" daemons.

Reverting to previous version, the performance on the gateway is as expected.

PS:
I have also running many CusterXL with R80.40 without problems.

What hardware are you upgrading?

What version are you upgrading from?

Seems suspicious either way. I’ve upgraded countless clusters to R80.40 without a hitch.

the upgrade was performed from R80.10.

TheTOP output, when I meet the issue, I saw 2 "watchdog" processes are 100%

The messages log file showed errors about GNAT isn't able to de-allocate resources. This issue was mitigated disabling the GNAT feature, but it didn't fix the issue

PS:
I have also running many CusterXL with R80.40 without problems.

unfortunately I cannot provide the output because I downgraded the cluster to R80.30 because the business impact was very high 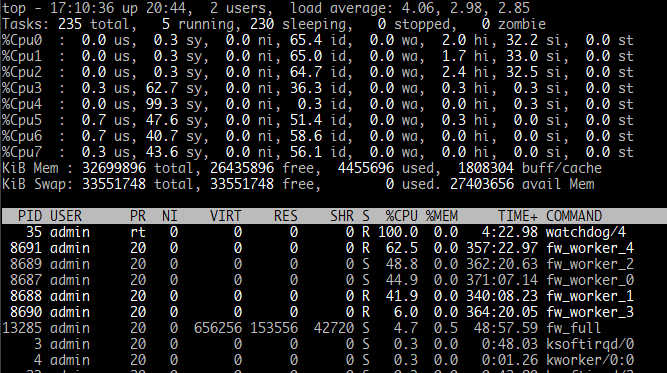 It looks like we have a CIFS connection with high load in IPS. But why watchdog is on 100%?

Timothy_Hall
Champion
In response to Daniel_
Jump to solution

Wow that is strange that the watchdog is eating CPU like that, and at real-time priority no less which will constantly kick other processes (like fw_worker_X) off the CPU and cause astronomical amounts of context switching thus degrading performance.  The watchdog is a Gaia/Linux program (not Check Point product code) that ensures the system has not hung by running a series of sanity tests and writing to the /dev/watchdog file (called "kicking the watchdog") at least once a minute.  If it fails to perform this write in a timely fashion the system is assumed to be hung, the watchdog barks then bites which forcibly reboots the system from the hardware level.

What kind of hardware are you using?  Can't see why watchdog would need so much CPU unless there is some kind of hardware issue, you should get TAC involved on this pronto as the watchdog is most certainly NOT a process you want to have issues with, as it can affect the stability of the system or even the ability to gracefully recover from a hard hang.  If a system is hard hung and the watchdog does not bark then bite to reset it, the only recourse is physically pulling the power plug.

Perhaps the watchdog is chasing its tail after someone spiked its water dish with Red Bull or something.  🙂

Daniel_
Collaborator
In response to Timothy_Hall
Jump to solution

Thanks for this answer.

TAC is already involved. I have send TAC this discussion 😉

Timothy_Hall
Champion
In response to Daniel_
Jump to solution

I figured you must have been on open hardware; would be very surprised to see this kind of watchdog issue on a Check Point gateway appliance.

Daniel_
Collaborator
In response to Timothy_Hall
Jump to solution

The original post was from ggiordano. He has been using appliances.