This question is more of a sense check to the hive mind as I am still finding my way with CP security gateways.

My organisation is migrating it's primary Internet access link to a new supplier.  I have arranged a suitable out of hours maintenance window and want to verify that what I'm planning will work.

The 4900s are configured with a default static route to push all non-specific traffic to the next hop IP address of 10.145.91.150.  This is the HSRP IP address of our current provider's CPE.

I have requested that the new supplier configure their CPE IP details to mirror that of our current provider and to tag the sub-interfaces with VLAN 4.

The new supplier is presenting their circuits via 10Gb capable copper cables. Our 4900s have the expansion card installed allowing 4 x 10Gb interfaces.  During the maintenance window, my plan is to amend the IP addressing of the existing VLAN 4 VLAN interface and VIP to something unused by my organisation, create a new VLAN interface on one of the 10Gb physical interfaces tagged with VLAN 4, re-apply the IP addressing, import topology and create the VIP.

The 4900s should then send all default routed traffic out of a different interface.

I have a pair of spare 4600s that I'm using to duplicate the bond and VLANs and my plan appears to work but I want to ensure that I'm not missing any 'gotchas'.

There is only 1 issue with your approach, do not in any case use the "Get Interfaces with Topology" !
We have seen to many times already that in a existing cluster configuration, interfaces lost their manually added configuration. Sometimes you need different settings for Anti-Spoofing than the gateway thinks for instance.
When you change the connection to the new interface all you need to do is go into the topology page of the gateway cluster and double click the internet access interface, as per your plan you do not change the IP addresses, so all you will need to change is the actual interface for the connection, this is where you can find it: 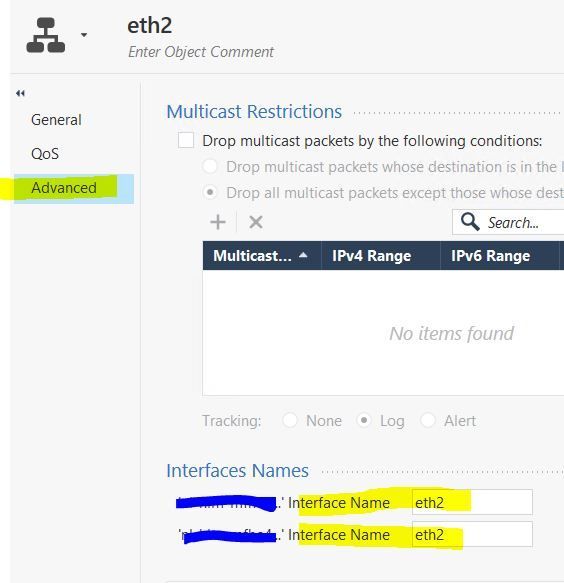