I configured one vpn tunnel per pair of hosts

Yes that is normal, especially when you configure "pair of hosts" as there will be a new Phase 2/IPSec tunnel created for every possible combination of hosts communicating through the VPN.   Here is the overall process and how the various VPN Tunnel Sharing settings fit into it:

The size of the object (i.e. host or network w/ mask) used in the Firewall/Network policy layer permitting the VPN traffic does not matter as far as what is proposed by the Check Point in Phase 2, it just needs an Accept action for anything to happen at all.

One accepted, the Check Point looks at the destination IP address and which VPN peer's VPN domain it falls into.

Once the VPN peer is selected, next it determines what VPN Community that peer is a member of so it knows what VPN settings to use for the proposal.

Regardless of where VPN Tunnel Sharing is set, here is what the settings mean:

The proposal of subnets can be controlled much more precisely through use of the subnet_for_range_and_peer directive, see scenario 1 of sk108600: VPN Site-to-Site with 3rd party for how to set this up.  This directive will almost certainly need to be employed when setting up interoperable VPNs with Juniper, Fortinet, & Sonicwall as these vendors are quite picky about what subnets/Proxy-IDs they will accept in a Phase 2 proposal.

Also note that the ability to define a separate VPN domain per individual VPN Community is on the roadmap and will hopefully become available at some point.

when I use one tunnel per pair of hosts, the tunnel works initially, after a point of time, the connectivity from specific source is rejected by the remote peer as it sees as wrong SPI.the same time the remote peer accepts the packets from other source server( which is in the same subnet) as it is coming from new tunnel. why it is so?

What you are describing is probably an SA lifetime mismatch between your firewall and the VPN peer, or your VPN peer is unexpectedly expiring the tunnel early due to a data lifesize or VPN idle timer.  Make sure the SA lifetime timer is set the same on both sides for IKE Phase 1 but especially IPSec/IKE Phase 2.  Note that Check Point expresses the Phase 1 timer in minutes and Phase 2 timer in seconds, whereas most other vendors express both values in seconds.  Also make sure the peer has disabled any VPN idle timers, and has also disabled the data lifesize or set it to an unreachably high value.

what is that VPN idle timers and data life size? 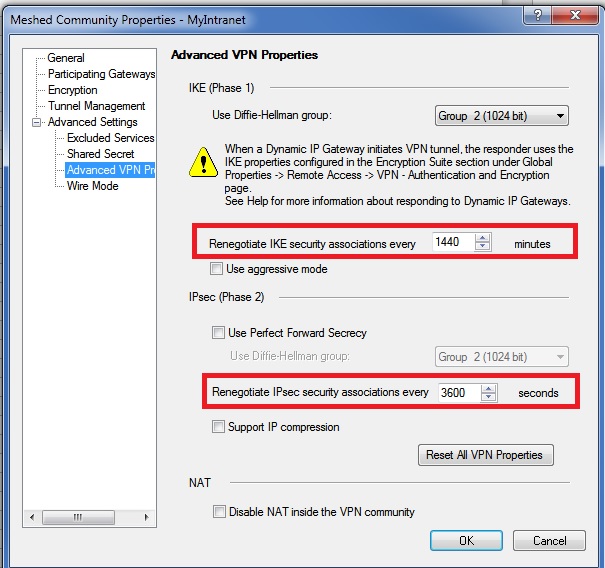 Data lifesizes are not set in the SmartDashboard/SmartConsole, see Scenario 6 of this SK:

I set the tunnel as one tunnel per subnet, still I see the multiple SAs on both phase 1 and phase2.

The tunnel works only for few hours. then it is down. what could be the reason

It is normal to have multiple SAs.  Please read my prior postings in this thread telling you what to check.