Just wondering if anyone else has seen this. Upgraded our VSX (13800 appliances) from R80.10 Take 42 to 112 yesterday. All went great and no issues during update process but this morning noticed that CPU core utilisation profile has considerable changes - 10 cores that were allocated to a busy VS dropped from 25% ave to nearly zero and some others jumped up, especially two SXL cores.

Sample of busy VS

First I thought that we have started accelerating more but that was not the case as total fwk CPU usage on that busy VS was just under 200% (so should have been 20% per core with 10 cores) and SXL stats were as before. So nothing had changed traffic / acceleration wise.

Next thing I suspected that affinity settings might have been modified by T112 somehow. But it all looked great from config point of view for VS6 - 10 dedicated cores 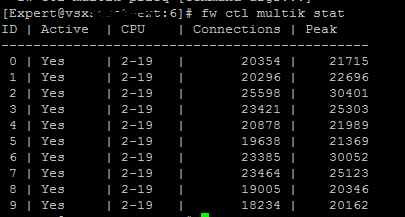 Re-run affinity command and bingo - cores allocated as before T112

Same happened with another VSX: 23800 appliance cluster, upgrade from Take 35 instead of 42 though.

Regular firewalls seem to have avoided any issues with CoreXL.

Have to say, that's bizarre.

Glad to see you were able to resolve the issue.