I have a number of sites/organisations where the blocking of the Social Media category (occasionally with some exceptions) is a requirement.

The problem is, when we do so this will block all of the analytics, ad-serving and optimisation services provided by the likes of Facebook, twitter as 'Social Media'. This happens so much that we have had to drop and NOT LOG that category to stop the logs filling up and the UserCheck agent reporting Facebook or Twitter (or other similar) activity to the user when they just go to (for example) CNN International - Breaking News, US News, World News and Video

The example of CNN includes no fewer than 59 connections to content delivery and analytics sites...on its front page!

Iclusing but not limited to:

www.google-anlalytics.com for example is currently uncategorised, but extremely widely used.

cdn.optimizely.com is categorised as Computers and Internet (which is fine)

analytics.twitter.com which, while it's primary category is business/economy it is also classed as Social Networking. 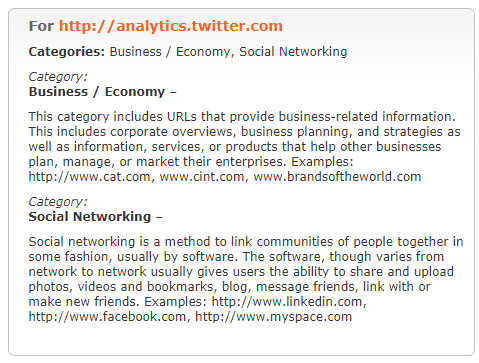 Another one of CNN's front page is connect.facebook.com

This is just CNN's front page. When I did a capture on a site recently I capture 85,000 hits of this type in just three days and they only have a couple of hundred users. The users know they can't get to Social Media so rarely try and no mobile with the Social Media apps (no mobiles at all in fact) are allowed on that network; we can conclude that leaving aside clicked links and genuine attempts to use social media, a large percentage of these are false positives caused by analytics and content delivery hosted by from the Social Media organisations.

Dropping and not logging this has reduced the problem, but recently this caused a problem for Webex - Cisco Webex Teams being categorised as Social Media and of course the people on site never saw anything blocked.

Effectively it is clear that there's only one real solution and that is for Check Point to split the category (and tags) to be Social Media only for the actual Social Media platforms themselves and all the analytics etc. need to be in a different category. Internet and Computers would do, but I personally think a special category for 'analytics and tracking' might be useful. If this is done in future then the analytics can be tagged as Social Media to prove their credentials as long as they are not in that category either as a primary or secondary (etc.) category.

Has anyone else experience this, and what have been your solutions to this requirement?

Please don't make this discussion about whether we should be blocking social media at all, there are plenty of places for the discussions about censorship and/or human rights - this isn't that place. I really would like to keep this just about the technicalities of the Internet and this particular Check Point blade.

On a PoC for endpoint URLF I had exactly the same issue that customer wanted to block social media but this was to noisy because of the tracking/analytics stuff.

We worked around this by specifying a block rule for the analytics URLs of Twitter, Facebook and Google without User Check before social media block rule.

This helped but is not the best solution as URLs might change or services of other services are missing. So a category for this would be great!

I haven't seen this come up as a requirement, but it's not a surprising request.

It's amazing how much "social media analytics" is out there on a given site.

Locally, of course, you can override the categorizations, but I can see the value in having a proper category for this.

John_Fenoughty
Collaborator
In response to PhoneBoy

I took the data extracted from that one site and attempted to create a URL based override list (like my Skype one) but that night, when I reached the 160 mark in different specific URLs (including subpages) I decided that this was not a job for one man!

If we're in the place of requesting the splitting of categories, as a European I'd still very much like to see 'gambling' split in to 'Gambling sites where you can place' a bet and 'sites that discuss the mathematics/probability associated with gambling' such as wizardofodds.com - I know America has a big downer on gambling (unless it is owned by the state and then of course it's fine) but much of the world sees it as a perfectly acceptable hobby - particularly the discussion and conceptual elements.

All of the other URL categorisation products which preceded Check Point's URL&App filtering blade and of course have been much improved upon by Check Point (Websweeper, Websense, WebScout etc.) also lump all of this in to just 'gambling' so I'm not holding my breath but I think it would be good to see this intellectual pursuit being less vilified.

Anyway, let's try to see if Check Point can look in to the analytics issue first!

Anyone else keen to see this resolved?