A new interesting function for performance tuning has been included in R80.40. Dynamic split of CoreXL changes the assignment of  CoreXL SND's and CoreXL firewall workers automatically without reboot.

It also works the other way round.

The Dynamic Split Daemon (dsd) has three stages in each iteration

Run these commands in the Expert mode

A small update of the article with pictures.

Unfortunately I cannot test it, because the cores only had a utilisation of about 10%:-)

Run these commands in the expert mode

I added that to the original article.

What are the correct steps?

If this function is activated for r80.40 with 8 cores by default?

Yes, it is enabled with 8 and more cores by default.

Any study on how efficient actually is this CoreXL split ? Also, do you know how often is current load evaluated and re-assignment made ?

I'm using it on a 16 core system. I don't see any redistribution of cores.

Did you turned it on (As mentioned above It have to be turned on).

The function is off by default (initially). It enables us to get wide production exposure before exposing everyone to the new functionality

Jerry
Leader
I'm using it on 24-core 15600 CXL and it makes massive difference only when SXL has more than 90% of rates so most of your SecureXL traffic hits proper templates 😛 will post something soon how this performs but I see a nice way of self-disti within CXL/SND on that ClusterXL.
Jerry
1 Kudo
Reply
Share
Highlighted

Jerry
Leader
here is a bit I'm about to turn on about, just waiting for "reboot time" 🙂

sequence of events though:

You say, -o stop command does not survive reboot.

Was different in R80.40 EA and the presentations in Israel.

Thanks, I'll change that.

Jerry
Leader
all matches this SK though:

Exactly right. We have also just had a TechTalk about the feature.

Jerry
Leader
we've had the Tech-Talk yesterday too 😛 with Gay and Amit 😛
and that was on particular 24-core SG which apparently does not have enough "load" in order to show-off how SND is "behaving" 🙂
but at least we've seen it all working as expected with multi-Q replaced by DS. More by enclosed in the next post.
Jerry
1 Kudo
Reply
Share
Highlighted 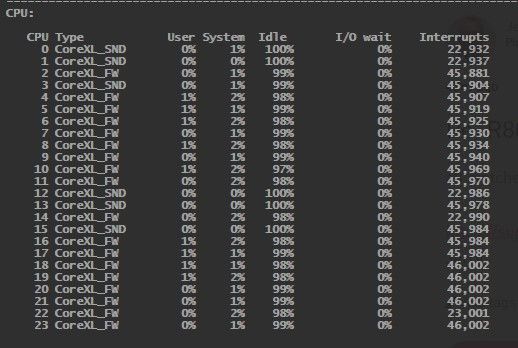 Will dynamic split also be released for open servers in the future.

It is currently supported only on Check Point appliances. Under evaluation per necessity and technical implications as to open servers / cloud