A Primer on Anti-Spoofing

Every once in a while, I run across a discussion around Check Point, and I think: you know, I wrote something about that back in the day.
Today, that topic is Anti-Spoofing.
The feature hasn't changed all that much since the first versions of the product.
That said, a major improvement is coming in the R80.20 release!

One of the ways it manifested itself back in the old days was you would see a packet accepted on one rule (say, rule 4), then immediately dropped by Rule 0.

Pretty much since day one, the security gateway has always inspected packets against the rulebase twice:

Older versions of Check Point had some ways to modify this behavior (e.g. the "Apply Gateway Rules to Interface Direction" feature and "Install On"), but this did not apply to anti-spoofing, where the above logic always applies.

When anti-spoofing checks fail, they show up in the logs as either drops or rejects on rule 0. If you get a log entry that looks like:

it means that the source IP of the traffic (in this case jungleman) is not properly included in le0's "valid addresses" setting.
If, on the other hand, you see something like this (as was the example above):

it means that the destination IP of the traffic (in this case, kyle) is not in qe0's "valid addresses" setting.

Note this may actually indicate a routing problem, particularly if the interface it is being rejected on is not the interface you expect.

How Does NAT Factor In?

In currently supported versions, NAT occurs before routing, but only if "Perform Destination Translation on Client Side" is enabled in the Global Properties, Network Address Translation section.

What about Dynamic Routing?

In an environment where the gateway participates in Dynamic Routing, if routing makes a change that is inconsistent with the anti-spoofing configuration, traffic could easily be dropped.
This has led some customers to disable anti-spoofing (which is, of course, not recommended).

In R80.20+ Gateways, there is an option to have routing define the anti-spoofing configuration.
You can see this option starting in R80.20.M1 and it's available for gateways R80.20 and above: 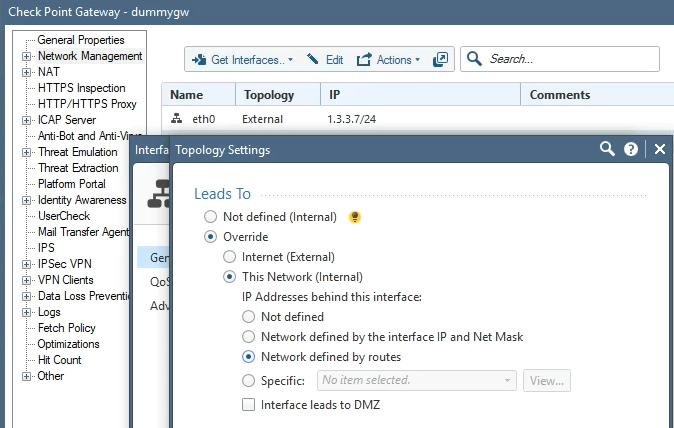 >>In R80.20 Gateways, there will be an option to have dynamic routing define the anti-spoofing configuration.

Everyone is waiting for R80.20 to reach GA state because of all these improvements it features.

About time for the dynamic routing integration with anti-spoofing!

It was one of the major pains for me in the past, when designing highly survivable infrastructures, as I had to account for all possible networks hitting the interface in question.

This, in turn, relaxed the normal security state, as that traffic was always allowed.

I agree for me is the one of biggest pain as well. So I'm happy to see it will change finally. Unfortunatelly we must always wait until new releases like R80.20 will settle down little bit after GA and after thet we can put it into production. So it seems I need to stay tunned and wait until I'll be to fully enjoy it.

Thank you for starting the topic on anti-spoofing.

Back in the day (R76), Check Point published a document regarding anti-spoofing; see: Preventing IP Spoofing. The document shows the following picture:

For the Alaska_GW, the Firewall makes sure that:

For the Alaska_RND_GW, the Firewall makes sure that:

When you configure Anti-spoofing for a Security Gateway, specify if the interfaces go to the Internet (External) or an internal network (Internal).

As External (leads out to the Internet)? 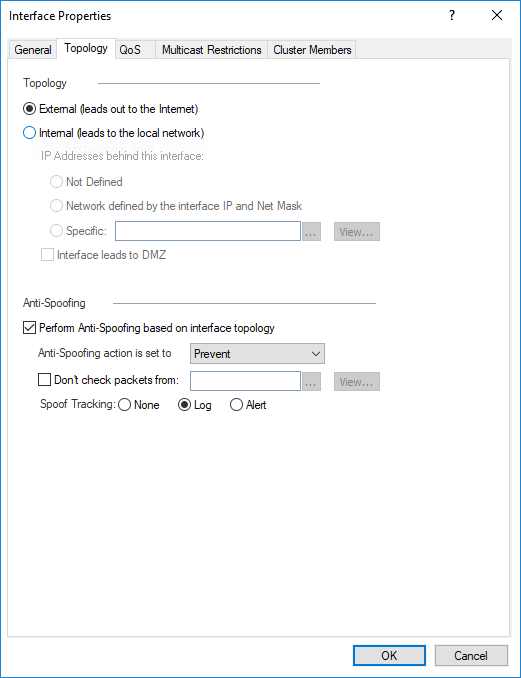 As Internal  (leads to the local network) + Networks defined by routes? 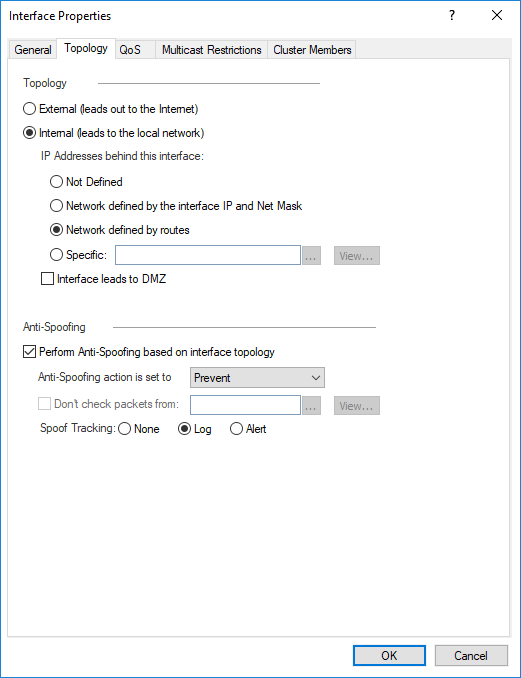 Or something else? Please describe.

I set up a lab environment earlier this week with R80.20 Public EA (August) but still get address spoofing messages.

That looks like the correct configuration, but it's possible this is not functioning in the Public EA as of yet.

Which one is the correct one, first (external) or second (internal + networks defined by routes) configuration? Please confirm.

In the example above, interface if3 can receive packets from private networks and public networks. How would you configure the topology for if3 then? Can you give an example for R80.10 and R80.20 (because I have no clue; and I can't find an example in Check Point's documentation)?

if3 should be defined as External.

External really means "all IPs not defined as valid on other interfaces."

So, for example, if I have a gateway with:

The anti-spoofing configuration would be:

This applies to all versions (including R80.20).

Although these commands have been previously disclosed, no anti-spoofing discussion would be complete without the real-time "panic button" gateway commands to temporarily disable anti-spoofing:

fw ctl set int fw_antispoofing_enabled 0
sim feature anti_spoofing off; fwaccel off; fwaccel on
Edit: Due to the changes introduced for SecureXL in R80.20+, the above commands (specifically the sim feature command) will only work on an R80.10 or earlier gateway.   For later versions see further down in this thread.
--
Second Edition of my "Max Power" Firewall Book
Now Availaible at http://www.maxpowerfirewalls.com
Book "Max Power 2020: Check Point Firewall Performance Optimization" Third Edition
Now Available at www.maxpowerfirewalls.com
3 Kudos
Share
Reply
Highlighted

Agreed, I'm pretty sure these kernel variables didn't exist back in the day.

This has just saved me some time, thankfully in the lab environment.

BTW, I am seeing:  Command 'sim feature' has been replaced. Use 'fwaccel feature' instead.

The ability to disable anti-spoofing "on the fly" in SecureXL has been reintroduced with the R80.30 gateway release, but at this time it only works on an R80.30 gateway that is using the new 3.10 kernel and on R80.20 Jumbo Take 103+.  I can't see any reason why the 3.10 kernel would be required for this feature, so the relevant SecureXL kernel variable sim_anti_spoofing_enabled may well be retroactively introduced into R80.30 using the older 2.6.18 kernel in a future Jumbo HFA.  I'm assuming the R80.30 SIM code for kernel version 3.10 is on a separate track from the kernel 2.6.18 SIM code which would explain the discrepancy.

Without further ado, here are the commands I successfully tested in my lab to disable anti-spoofing "on the fly" for an R80.30 kernel version 3.10 gateway, or R80.20 Jumbo Take 103+:

Note that SecureXL does NOT need to be restarted with fwaccel off;fwaccel on for the SIM change to take effect like it did in R80.10 and earlier with the sim feature command.

Also note the use of the new -a option which attempts to get or set a kernel variable in BOTH the Firewall Worker/Instances and the SIM driver (SND/IRQ) simultaneously like this, so errors on one side or the other will certainly be encountered:

fw  ctl  get  int  fw_antispoofing_enabled  -a

fw  ctl  get  int  sim_anti_spoofing_enabled  -a

This new -a option for fw ctl set/get was introduced in R80.20, and for the first time allows SIM/SecureXL variables to be queried for their live values and even be modified "on the fly" which was not possible in R80.10 and earlier; to modify SIM/SecureXL variables in those earlier releases the new SIM variable values had to be placed in the simkern.conf file and the firewall rebooted.

The steps taken in R80 towards zone-ized anti-spoofing groups is a positive direction imho, the ease of use I have found with the change is welcome. Why uRPF has been so difficult and complicated to implement here has always been a mystery for me.

Having said that, using dynamic routing on firewalls has been controversial for as long as I've reluctantly been labelled 'a firewall guy' (too long a time). I think we all know the risks inherent in security zones that can be dynamically changed through triggers via adjacent advertisements and the implications of a compromised router on access control under those circumstances.

The integration of uRPF and OSPF has long been useful for for rapid first hop dropping of virus/worm infected hosts in operations situations (where injecting a null route into the table is used to black hole infected hosts quickly). I've seen this done when firewalls are overloaded and unresponsive (it's quick, effective and less resource cost to block at the L3 switch).

I wonder if a similar use case could be made here with these features (for legitimate or nefarious purposes).