I want to disable or switch off the CCP packet check on specific interfaces. Only on 1 interface out of 8.

So if the CCP packet is not receiving on this interfaces, this will not cause cluster failover.

Is it possible somehow?

Yes just define the desired interfaces as Network Type "private" in the topology of the cluster object.  However I don't think you are allowed to present a cluster/virtual IP address when the interface is in this mode; the firewalls just use their dedicated fixed IP addresses on the private interface.

You can configure the interface to only monitor the physical link rather than CCP packets:

Thanks for the information.

After I posted my question, I found this article

An I forgot one important thing, this is an SMB cluster R80.20.15. The article belongs to R81. Is it applicable on SMB appliances as well?

Not sure if you can do this on Gaia Embedded.

Can you guys move this to the SMB forum

@mcatanzaro Done. It was not obvious from the start that this is an SMB issue 🙂

You are right, Sorry about that

This is not possible on locally managed SMBs. On centrally managed, you can configure it: When High Availability is disabled on the interface, the interface is considered non-monitored private (not part of the cluster configuration).

Yes, it is a centrally managed SMB cluster. If I set non-monitored private, it will cause lost the ability of the virtual IP which is really important in that two trunc interface.

I know the cluster prerequisites, which describes between cluster interfaces must be layer 2 connection....

There is a special device with two interfaces: 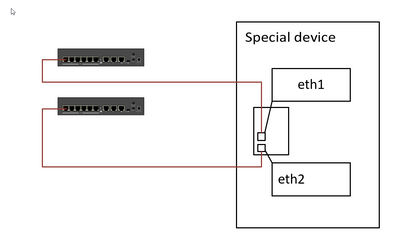 On the special device (appliance) eth1 and eth2 is a linux bond trunc interface. This device is probing its default gateway on both interfaces. The traffic will flow on that IF, which receives the ARP answer faster.
And no, I can't put an active device there (router, switch, etc.) It is prohibited.

This is a very special scenario

Any idea will appreciate