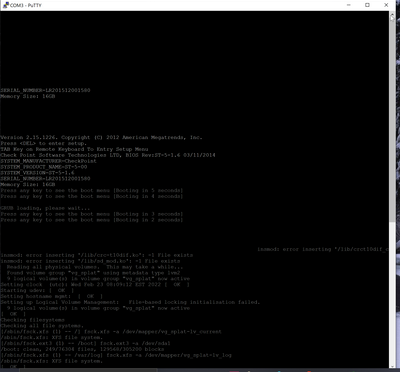 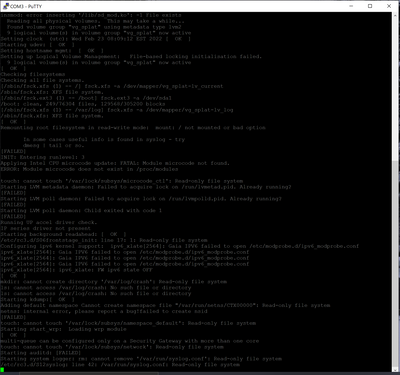 Thank you in advance for taking the time to read this and provide suggestions / advice. I want to specify that I am entirely self-taught so bear with me as I learn.

Over the past weekend, I had the opportunity to come in and run some updates on my firewall and Smart-1 205 Management Device. The firewall updates were fine, no issues. My Smart-1 205 update failed. When the update failed, it cut network communication to the device so I connected to it via Console Cable and attempted to revert to a Snapshot that I took prior to the update. The device seemed to reboot okay initially but as it was coming back up, I started seeing [FAILED] messages via pUTTY through the console connection and then activity just stops. The display on the device itself just continues to read "Loading..."

This isn't the first time I've had to revert to a snapshot so I don't think I did anything different and anytime I run an update, I take a snapshot.

My gut is telling me that I will need to reset and rebuild the device but before I do that, I wanted to see if there were any other remediation steps or KBs I can attempt to follow to resolve.

I've attached the images of the serial readout from pUTTY

First idea is entering Boot menu maintenance mode and check the file system: sk92442: How to check the hard drive integrity in Gaia/SecurePlatform OS with the 'fsck' command

sk170952 gives a similar error when restoring an ext3 snapshot to a xfs volume - but this is not your case.

First idea is entering Boot menu maintenance mode and check the file system: sk92442: How to check the hard drive integrity in Gaia/SecurePlatform OS with the 'fsck' command

sk170952 gives a similar error when restoring an ext3 snapshot to a xfs volume - but this is not your case.

Thank you very much, I will jump in and see what I find then post results

The sk @G_W_Albrecht gave you is definitely a good idea. Keep us posted what happens.

Alrighty, when I boot through to maintenance mode, It eventually ends me at the following:

I should note, that it does not seem to accept any commands at this stage, just keeps referencing back to sh-4.2# regardless of what I type in

Alright, well I went through the steps to repair and at the end of the repair attempt, I get the following message:

So I don't further damage this or cause additional issues, I think it's wise if I work through my check point contact and have them take a look. This Smart-1 205 was close to end of life anyway, so it may be worth it to just push for the next unit. I don't have any serious policy changes that need pushed immediately anyway.

Thank you both for your help

RMA anyway, i would suggest !

Well, you are not having much luck with that box...maybe contact TAC and see if they have any suggestions.

Part of it also, is my own lack of experience with these devices. I'm learning but would love to take some courses on them but my company won't pay for it and I can't afford it so I'm stuck learning as I go.

I hear ya...good news is, its mgmt server, so there is not too much to learn, compared to actual firewalls.

Another update, I rebooted the device, went back into maintenance mode and now it is allowing me to work through the KB. I was probably doing something incorrect

First off I want to let you know that as of this morning at 08:22 Hrs EST, I have my Management unit back up and working and it was because of your post that I was able to figure out a solution.

After troubleshooting sk92442, as I updated you on yesterday, I got to thinking about sk170952 that you also mentioned and it hit me this morning. What if my biggest issues were between elements of EXT3 and XFS residing on my system at the same time? I know I've been through a few EA programs so I'm not sure what changes that might have had on my system. On a whim I decided to attempt to revert to a backup I had of my system at R80.10, which would have been a fully EXT3 filesystem, if I'm understanding this correctly.

This succeeded and my management device is now back online. I'm in the process of slowly moving the device back to R80.30 and reverting my firewall from R80.40 to R80.30. I'll hold my horses on R80.40 since that seems to have been my catalyst for disaster.

I appreciate you taking your time to help me out. It has taught me a lot that I didn't know and better equips me for situations in the future

1 Kudo
Share
Reply
Latest Topics
View All ≫
Trending Discussions
Migration from a Standalone environment to a Distributed environment
Log Exporter exporting to splunk
Is it possible to visualize on Smart Console the size of the logs that each active blade generate?
Labels