I'm looking for input on something that I recently ran across. Our organization runs a lot of VPNs, both with external agencies and internally as well. Because all of our internal communication runs over VPNs, we have configured TCP MSS clamping for a few years now to try to combat fragmentation and slowdowns. From the documentation that we read, to do it in GuiDBEdit, you have to set the "fw_clamp_tcp_mss_control" value to True on the gateway object, and then set the "mss_value" on each of the individual interfaces of the gateway that have traffic going into/out of a VPN tunnel. We calculated the MSS value we thought would be appropriate, put it on the internal interfaces in GuiDBEdit, and it seems to have worked, we haven't had a lot of issues with fragmentation.

Jump forward to last week. We've had issues with getting high-throughput on a particular VPN that we use for SAN replication, so I've been playing around with different settings in the VPN community and on the two gateways. One thing that I did was to turn off IP compression in the VPN community. That about doubled the VPN throughput and pretty much fixed the problem in itself. We've always had IP compression turned on for our internal VPNs and never really thought about how it might be slowing them down. The other changes I made were to reset the MSS value on the SAN interfaces of the source and destination gateways to 0 in GuiDBEdit. I did that because we had turned down the MTU value on the SANs themselves to 1280, so I figured there shouldn't be any fragmentation in the VPN if the SANs were negotiating a lower MSS value on their own. I was then doing a "tcpdump -i [interface] -vvv | grep mss" from the CLI of the two gateways, and I found that the SANs were not starting with a lower MSS value themselves, they were still starting with 1460, but over the VPN tunnel, one or both of the gateways turned the MSS value down to 1387. We've never set the MSS value on any interfaces to 1387, so I'm not sure where that value came from, but it seems like an appropriate MSS value to account for all of the headers that get appended to VPN traffic, so it looked like one or both of the gateways were doing automatic TCP MSS adjustment on the traffic. I've highlighted in red below the change in initial MSS values in the new connection.

This has been a pipe dream of mine for a while to have the TCP MSS adjustment feature work automatically, where the gateways could automatically detect if a new TCP connection was going into a VPN and set the MSS value themselves to account for the VPN headers, and if the traffic isn't going into a VPN just leave the MSS value to whatever the source machine set. Based on the Check Point documentation we read on setting up the TCP MSS adjustment, we thought that if you left the mss_value at 0 the gateway would just not do MSS adjustment on that interface, so you had to set the mss_value to something other than 0, but I'm questioning if 0 actually means to set the MSS automatically. So, I have a few questions:

I'm looking forward to hearing everyone's feedback on this. Having automatic TCP MSS adjustment would make my life a whole lot easier than trying to figure out which interfaces need the mss_value set and going into GuiDBEdit every time we have a new interface, plus the interfaces always change when you replace a gateway and reset SIC, so then I have to go back in to GuiDBEdit and set the mss_value on all of the interfaces over again.

This is news to me if it works.
Possibly what is driving this is overall SecureXL changes that occurred in R80.20.
I don’t believe those changes have propagated to SMB appliances, or if they have, it’s only in the newer appliances.

G_W_Albrecht
Legend
In response to PhoneBoy

The above applies to Centrally managed SMB devices such as 1100/1400 as well, however, the firmware from sk114675 (R77.20.51) needs to be installed to avoid the mentioned issue there involving clamping and WebUI/SSH access.

So his is possible on centrally managed SMBs 😎

First off, having IP compression enabled in the VPN community ensures that traffic cannot be accelerated by SecureXL at all, and I believe forces all that traffic into the F2F/slowpath.  That is why you got such a big performance jump when you disabled compression.  So while previously you were dealing with Firewall Worker/F2F handling of your MTU issue, you are almost certainly now dealing with how SecureXL/sim handles it.  This got a lot more complicated starting in R80.20 when SecureXL was overhauled and there were many early problems with this.  So just be aware of this moving forward and that you may need to tweak sim/SecureXL kernel variables.

Also be aware this shift may now incur higher loads on your SND/IRQ cores (especially because you are utilizing VPNs at LAN speeds) so you may want to check SND/IRQ core utilization, and adjust your CoreXL split if necessary to reduce the number of firewall workers/instances.

Also I hope you are using some form of AES and not 3DES which is 2-3 times slower.  If your appliance model supports AES-NI hardware acceleration, switching to AES-GCM will provide even better performance.

Are you using IKEv1 or IKEv2?

The answer to your questions 1-3 are in my book which is quoted below, and what you are looking for is called Path MTU Discovery; it should work on the Embedded Gaia SMB models but I'm not 100% sure, tagging the resident SMB expert @G_W_Albrecht to see if he knows.  Let me know if you have any further questions after reading the book excerpt below, the only correction is that IKEv2 does not have a Path MTU Discovery mechanism built-in.  At press time I thought PMTUD was part of its built-in DPD-like mechanism but it is not. 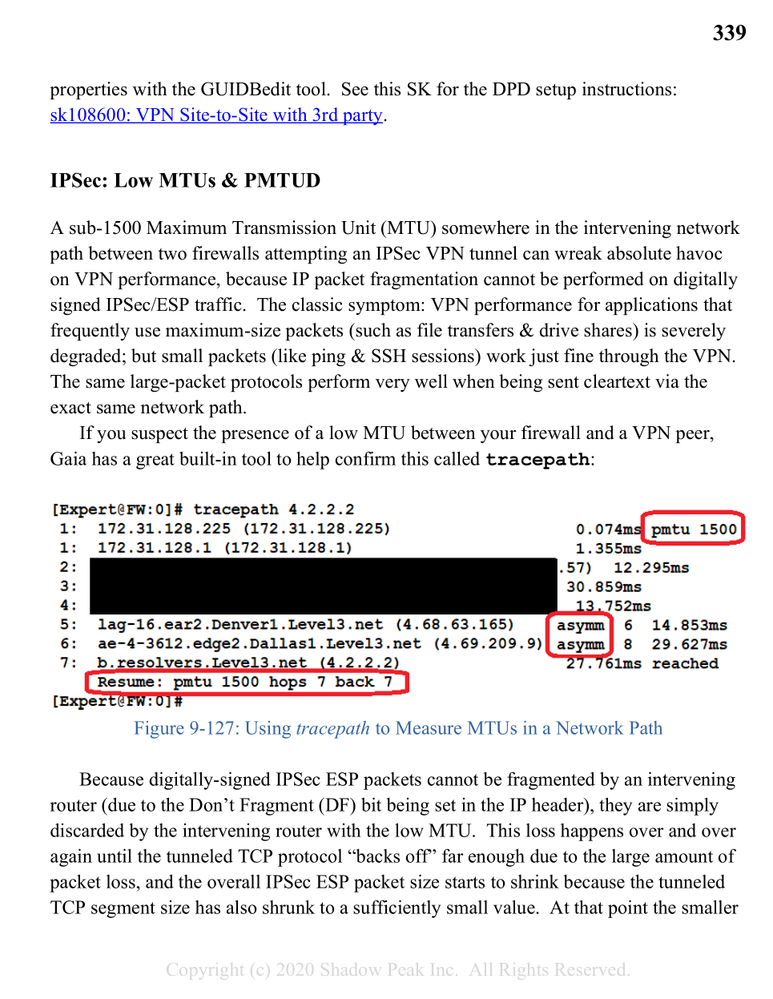 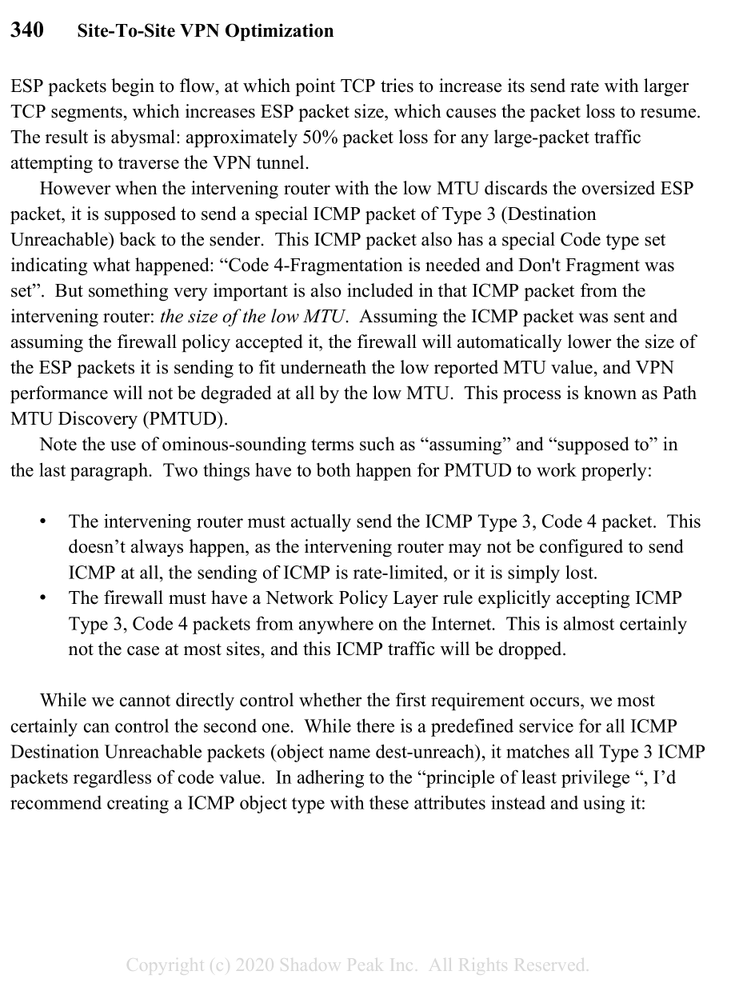 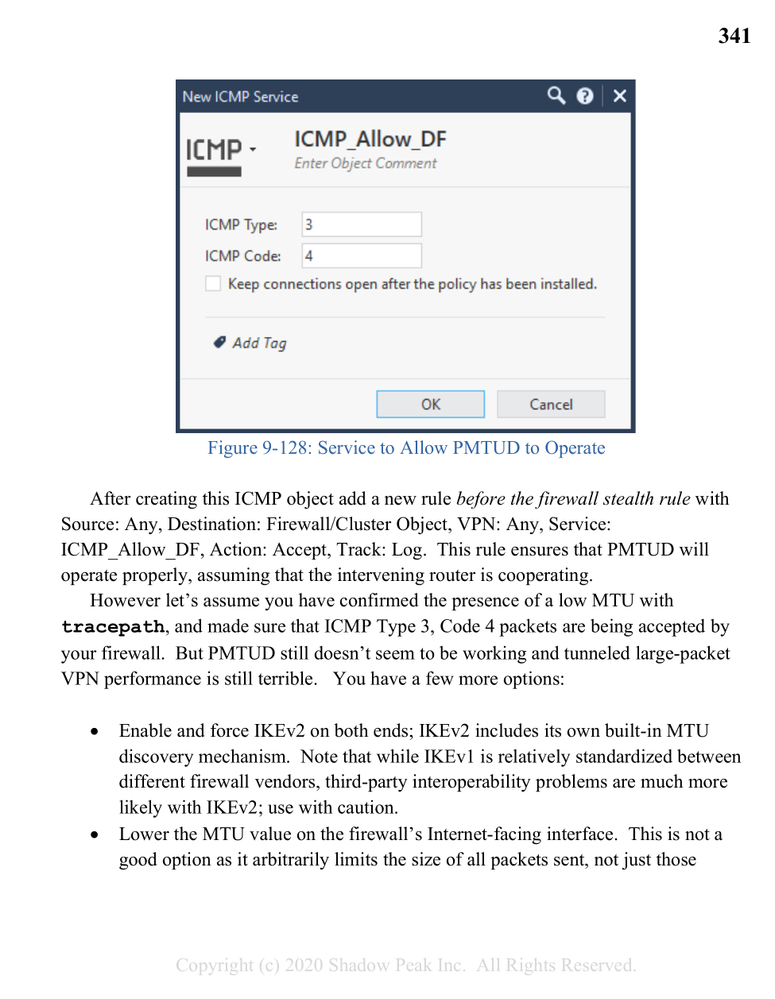 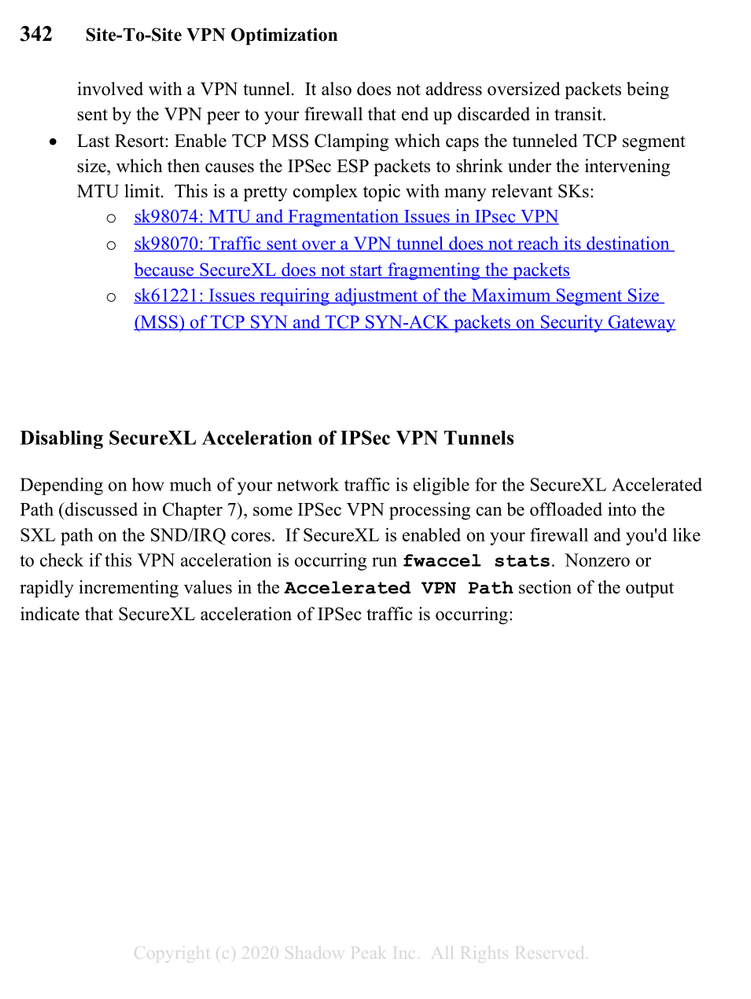 I thought the downside of using AES-GCM is that while it's faster than AES-CBC, it's not supported by SecureXL.

G_W_Albrecht
Legend
In response to Alex-

As you can read above, this remark concerns AES-NI hardware acceleration, not SecureXL. See sk105119 - Best Practices - VPN Performance for details! Without AES-NI, SecureXL does encrypt/decrypt the VPN Traffic (therefore the downside). You need certain hardware to be able to use this, and it will work with OpenServer, too.

GCM support was added to SecureXL in R80.30, and also later versions of the Jumbo HFAs in R80.10 and R80.20.  sk152832: VPN traffic being dropped for "decryption failed" when SecureXL enabled

Good question. I'd be happy for checkpoint to provide something more consolidated on this topic as well.

For what i've seen on the different SKs on the matter if you only care about VPN you should have:

This one is not required for VPN:

But mss_value setting seems to be still required according to the documentation.

If you do an fw monitor -F do you see different MSS on the SYN in the inbound and outbound chains?

In R80.20+ just append -a to a regular fw ctl get int command and it will try to show you the variable's value in both fwk and sim, assuming it exists.  You may get an error message if it doesn't exist in both which is expected in most cases like this:

I've checked a cluster on Azure and i've observed the same behaviour. MSS clamped to 1375.

TAC Confirmed the gateway will reduce the MSS to compensate the VPN overhead automatically if fw_clamp_vpn_mss = 1
sim_clamp_vpn_mss=1 are on.