However, it's not working: 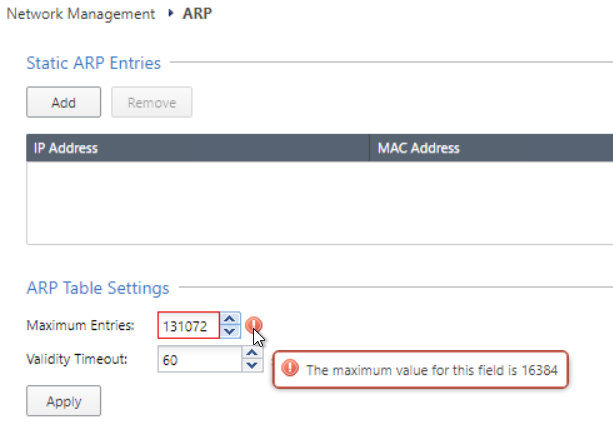 The SK says nothing about any HW or RAM requirements, so my test device is only a VM with R80.30, Take 111.

You need to step down to instruction number 4 - Instructions for Gaia OS.

You've never been able to set the value in the GUI above 16k.  The wording is really weird.

well, do I something wrong?

You know, I should pay closer attention.  Section 4 probably needs to be reviewed by someone.

Keep in mind, this can impact memory usage and performance.  Ideally, you should put a switch or router in front of your gateway and let that switch/router do the work if at all possible.

In our case, it was necessary because of an outdated design we were in.  After we got our ducks in a row and had proper switching/routing, we were able to go back to the normal values.  But this was on a 15600 appliance with a lot of memory.

Carsten_R
Contributor
In response to Tommy_Forrest
Thank you!
I think, there is a gap between "what is documented" and "what is possible".
sk153152 says, that take 107 will enhance the value to 131072 (PRJ-4156).
My gateway is on take 111.
0 Kudos
Share
Reply
Timothy_Hall
Champion

This doesn't make any sense, so pretty sure this is a typo and should say 131072.  When the older 16384 limit was in effect higher values could be "poked" directly into the running Linux kernel, but this was unsupported and could sometimes cause stability problems with the routed daemon.

In general this limit should not be arbitrarily increased unless needed, my book goes into how to make that determination.

Not sure how it could be unsupported when, in our case, TAC told us to do it.

Increasing the value through the Gaia web interface and/or clish is supported, directly poking it into the Gaia kernel with something like this from expert mode:

allowed one to go far beyond the original 16384 limit and is what is not supported.

Not supported by whom?  We were explicitly told by TAC to modify the threshold values via sysctl.

What I meant to say is that setting gc_thresh3 beyond the amount allowed by the clish set arp table cache-size command is not supported, regardless of how it is done.

Carsten_R
Contributor
In response to Timothy_Hall
I've contacted meanwhile the author of sk43772 - he contacted RnD, and the increased value of 131072 entries will be pushed in the next Jumbo HF for the 3.10 kernel. It seems, that it's currently only supported in the 2.6 kernel. However, I have actual no chance to test a 2.6 kernel with R80.30....
Let's see what the future brings...
1 Kudo
Share
Reply
Latest Topics
View All ≫
Trending Discussions
ChatGPT on CheckMates?
New VPN daemons in R81.10 / R81.20
CheckMates Fest 2023: Video and Q&A