In this series, we will show examples of using layers in R80.10 Management and Gateways.

Every week we will post a new layer design pattern.

A layer is a set of rules, or a rule-base. You can separate your R80.10 policies into smaller building blocks, and gain:

Layers can work in different ways:

Please see the following article regarding the enforcement of both options: Layers in R80

R80.10 allows you for the first time to unify your networking, applications, and content within the same rule-base. However, you might still want to separate the different inspections to smaller layers:

Let's see a typical pre-R80 policy after it's upgraded to an R80.10 management:

Let's say that we want to see all our rules in one place, and not to jump between the Network and the Application views. But we are still not sure about unifying them into one layer. The easiest step that we can do is:

1.    Enable "sharing" on the Applications layer: 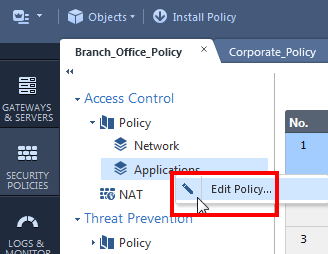 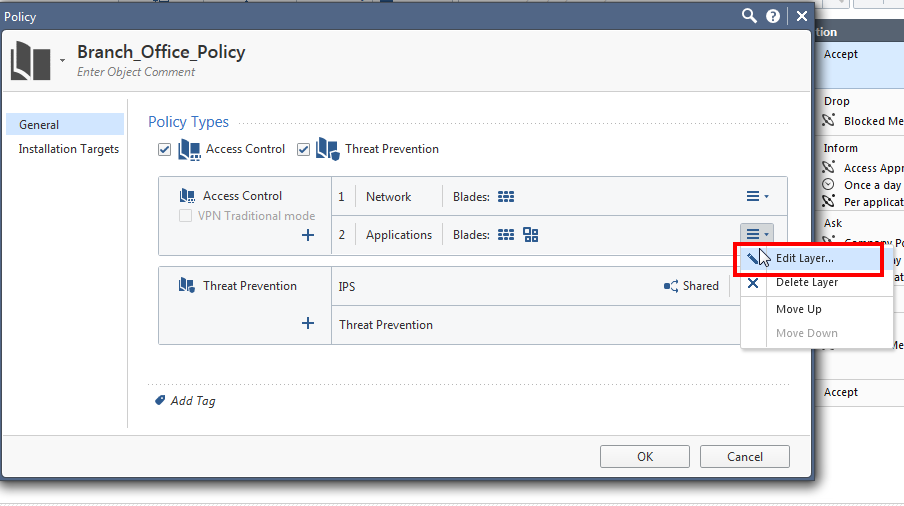 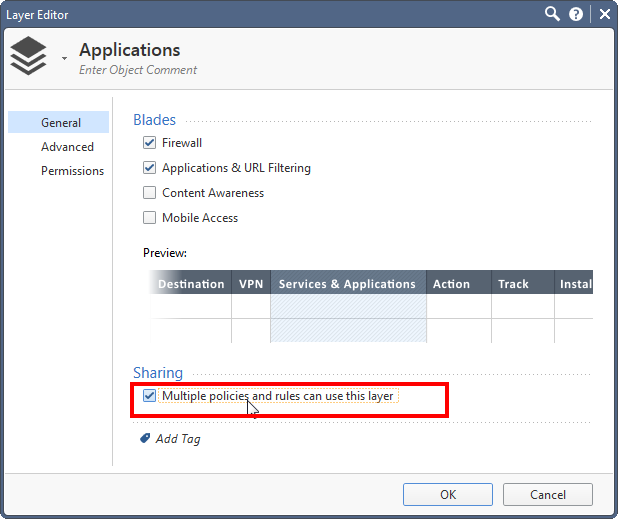 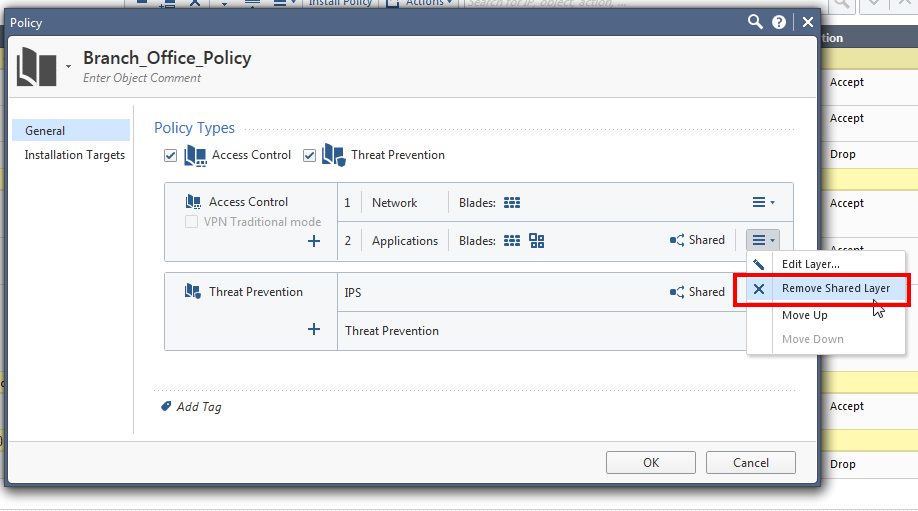 At this point, your policy is composed of a single layer, so instead of a tree, it is simply one "Policy" view. 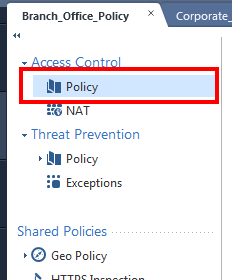 3.    Identify the Internet-facing rules that have their action as “accept”:

4.    For each rule from step 3, change its action from "accept" to the Applications layer.

Now the Application layer is be used as an inline layer.

Adding an ordered layer for every additional inspection of a blade could make sense. With the introduction of Content Awareness, we could continue to separate our policy to ordered layers: 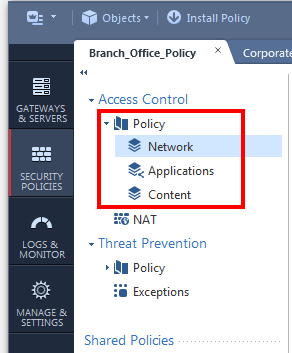 Q: are we multiplying the inspections for all the rules when we add an ordered layer?

Enforcement with ordered layers is executed on the gateway in a way that does not add a performance impact with every new layer.

It is more likely that a large number of ordered layers will be harder to manage by the admin, before any performance impact will kick in (imagine that "Tree" of Access Control Policy composed of over 10 ordered layers.. Maybe not the best visibility).

Q: my networking layer has 40% non-Internet rules. Isn't it redundant to include an application ordered layer that will be inspected for all of its rules?

Please note that although on first glance it looks like the next ordered layer’s rules are inspected in any case, applications are actually only inspected when specific protocols are identified. So in this example, a rule from the first layer that does not use a web-browsing service, will not get a performance impact by the Applications ordered layer:

We also recommend to always limit the source and destination of every rule. In this example, all the rules in the Applications layer have the Internet as the destination except for the last rule. Therefore, traffic that gets accepted in the first layer and does not go to the Internet, will only get matched in the last "clean-up rule", which in this case is "accept". Because this rule does not contain applications (or any of the “detailed log” options), this match will happen without inspecting any applications.

In our next layer design patterns, we will demonstrate separating a policy to layers based on different criteria's.

@1: They are evaluated in parallel and the actions are applied as "strictest" match:.

Exceptions are evaluated the other way round. So a exception which would lead to inactive would win over other actions...

The profile settings are taken from the first layer.

Can we also do layered approach in Geo policy

Geo Policy is checked and country-specific traffic potentially dropped in F2F very early on, and long before the policy layers are even reached.

I have a large enterprise environment recently migrated from another platform, and would like to enabled Application Control / URL Filtering - initially for the purpose of restricting guest and BYOD wireless users from accessing inappropriate sites or those with the category of critical risk. Historically we'd use ordered policies, match an access rule (HTTP/HTTPS to the Internet) then an application rule (block inappropriate etc). This would work fine for the initial scenario, but I think it makes sense to support use of applications etc directly in the main/first layer later - such as specifying Facebook in the Services and Applications.

So ideally I'd have specific application/URL allows in the first layer and general application/URL denies in the second layer. Using a separate inline layer for the blocks is a bit ugly - and people would forget to include it.

Is it possible to enable Applications and URLs on the access layer with a default drop, and Applications and URLs only on another ordered layer but using a default allow? It complained on publish (internal error), but then proceeded to verify okay... What happens when I want to allow (say) OpenVPN as an application in the first layer, but then the second application layer blocks the critical risk category (which includes OpenVPN)?

Yes, you can do that. It's fine. Just make sure to edit the first layer's properties and enable Applications & URL Filtering.