For the older models we have sk123865 LED indicators on Embedded GAIA appliance - but not for the 1550 !

We have four LEDs, from right to left they are:

- On / Alert LED : Will blink in red for alerts

- Internet LED : Shows if the internet connection is working

- Cloud LED : Shows if the SMB is managed from the cloud, else it is off

- WLAN LED : Shows if SMB WLAN is enabled, else it is off

The first two LEDs were called Power and System on the old UTM-1 Edge, WLAN LED was present as WLAN LED and this model also had a very valuable additional LED - the VPN LED reflecting the current VPN status ! That times are long gone, we now have the Cloud LED that will light up when connected to Cloud management and be off if managed centrally or locally. Initially, i thought this will light up if all TP services are updated to the current version - might be a helpful feature, but this LED only cares for cloud...

So It looks like they call it the "Management LED" per the Getting Started Guide, referring to SMP connectivity and provisioning.

The 700 Series didn't have a LED regarding provisioning, instead they added the behavior to the Power LED from R77.20.80, which I remember it made confusion for some of our customers before First Time Wizard thinking it was an error on the appliance 😛  Its good to have an dedicated indicator this time. 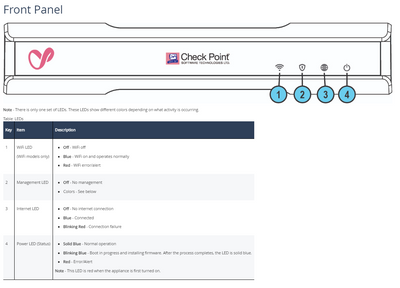 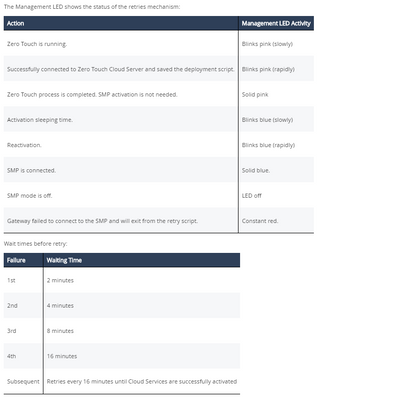