A Brief History of Demo Mode for Policy Editor and SmartDashboard

Consider this a bit of a Throwback Thursday post.

How many of you remember logging to Policy Editor as follows: 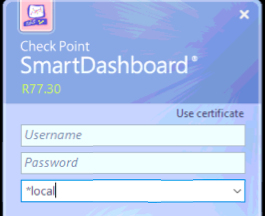 This was the way you activated Demo Mode before it was even exposed in Policy Editor (precursor to SmartDashboard) in NG FP2.

Here's a snapshot from R55: 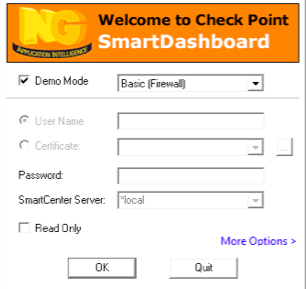 Anyone happen to remember the first version this was added to?

And did anyone realize that *local continued to work until R80?

One thing that was nice about demo mode pre-R80 was that you could run it on your local PC with no network connectivity.

Some features were not available as a result of that, but it was enough to show basic configuration and usability.

If you wanted, you could even edit a few of the files, such as:

Due to the significant changes in the management backend on R80, a local demo now requires a full VM of Gaia running.

As that can be resource-intensive, there is also a Cloud Demo for R80.10 where you connect to a VM hosted in the cloud versus on a local machine.

On the plus side, this means almost all features can be demonstrated short of a full policy installation.

The following features only used to work with a "real server" aka buy a license if you want to see for sure, but with R80.10, because even the demo environment is a full-blown operating system with validations and processes, you can run the following IN DEMO MODE:

2. Packet mode search on the rulebase

4. Command line validation support - everything is safe when changing via command line

6. You can share your demo environment with others, using your demo ID. So you can create a customized view and have others work on it as well.

1. You need Internet connectivity to reach the Management demo which is on AWS.

2. Alternatively, in the future: you will need more resources at your local computer with a local virtualization demo coming soon.

We hope that the benefits are worth the drawbacks.

You get a more "real" experience with R80.x Demo Mode.

Demo Mode in R77.x and earlier had numerous features that were "not available" because you were working with a subset of the configuration.