I am pretty confused about the difference between core protections and protections listed in Inspection settings.

What is the difference between them ?

What is a best practice & recommendation by Check Point ? Do we need to change this settings in a production enthronement ?

Note - In a pre-R80 SmartConsole, Inspection Settings are configured as IPS Protections.

HeikoAnkenbrand
Champion
In response to Jerry

Jerry
Leader
In response to HeikoAnkenbrand
Agree with Heiko, however I do believe that that's the profile we all shoudl be using as it is sort of "bunch" of recommendations all-in-one and we all should be protected by at least a CLONE of that one Profile.
Default one is the one you got when SG is installed (depoyed) whilst the Recommended one is simply the MINIMUM version which afterwards should be customized and used per Gateway configuration.

just my 5 cents. the call is yours of course.
Jerry
1 Kudo
Reply
Share

s_milidrag
Participant
In response to Jerry

So it is not recommended to user Recommended Profile

Also I am confused about TCP Invalid Retransmission protection.

Maybe I am wrong, but if something is Inactive, that means it is Accepted.

TCP Invalid Retransmission protection is declared as a high Important... 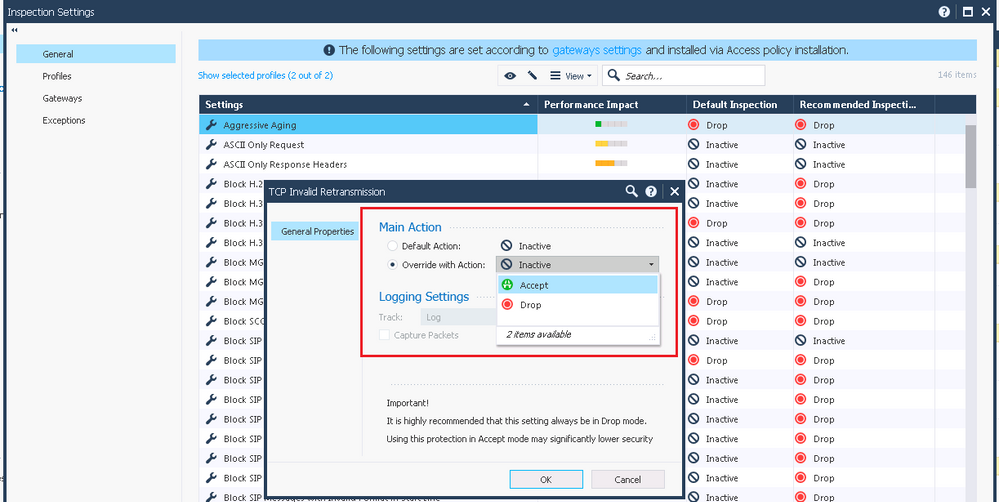 Jerry
Leader
you may also find interesting comparing all this with following:

Here is some content from my IPS Immersion class taking a shot an explaining the difference between Core Protections/Activations and Inspection Settings.

• There are actually four different “classes” of what might be considered IPS Protections under R80.10+ management. (Note that Geo Policy/Protection is the fourth, and will be covered later in Module 4) The subtle differences in how you work with each of these four classes is the source of a LOT of confusion. They are:

• Although they were part of the IPS blade in R77.XX and earlier, Inspection Settings are now part of the Access Control policy layers and no longer part of IPS/Threat Prevention in R80+ management. They perform protocol inspection that is inherent in the gateway’s stateful inspection process, and have the following attributes:

• For technical reasons, 39 Core Activations exist in a kind of “no–man’s land” between ThreatCloud Protections and Inspection Settings. They typically enforce protocol standards via a protocol parser, and have the following attributes:

◦ Instead of the typical Inactive/Prevent/Detect settings, “See Details...” appears instead
◦ Exceptions can only be added for a single Core Activation signature at a time, and the main Threat Prevention Global & Custom Exceptions DO NOT apply
◦ Core Activations ship with the product and are not modified or augmented by IPS Updates from the Check Point ThreatCloud
◦ Under R80+ management, if configuration changes are made to existing Core Activations, they can be made active on the gateway by:
▪ R77.XX gateway: Install the Access Control Policy
▪ R80.10+ gateway: Install the Access Control Policy (NOT Threat Prevention)

◦ Core Activations have a special “shield with firewall” icon and will typically have an “Advanced” screen where the Activation can be further tuned or adjusted.