We have a long-lived TCP connection over the Checkpoint gateway firewall. After 1 hour of idle, the connection got timed-out by checkpoint, and on the checkpoint we found the error: "First packet isn't SYN. TCP-Flag: PUSH-ACK"

You can't have the Check Point send a FIN upon state table connection timeout, but you can have it send a RST to both sides which will immediately notify them that the connection is dead.  From my book:

Some applications (such as web servers backending into a database server with a SQL
connection) create a large number of TCP connections, yet never send any appreciable
amount of data in them. All stateful inspection firewalls (including Check Point) enforce
an idle timer on all open connections. Check Point’s TCP connection idle timer is set to
60 minutes by default. Unfortunately when the Check Point TCP idle timer expires a
TCP connection, by default that connection is silently removed from the firewall’s state
table, and no notification of any kind is sent to the two systems who established the TCP
connection. When one of them attempts to send some data in the now-dead connection,
it is promptly dropped by the firewall with a “TCP out of state” message. Regrettably
some applications are just too stupid to quickly realize the connection is dead; they
continue attempting to use it while their traffic continues to be dropped.
At some point, one or both of the end systems involved finally figures out their
connection is truly and irrevocably dead, launches a new TCP connection that is
immediately permitted by the firewall, and everything starts working again. Depending
on how long it takes one or both sides to figure out what happened, the application may
appear to be hung and the user’s perception of overall application performance will be

terrible. Undoubtedly the firewall will be blamed for the application’s behavior, and
once again the firewall administrators must exonerate themselves. There are three
solutions to this problem:

1. Enable TCP keepalives on one or both of the systems participating in the TCP
connections that keep getting idled out. The keepalives will need to be sent at
least every 60 minutes. This is not a popular choice as it involves application
system changes to fix what is perceived as a “firewall problem”.

2. Increase the idle timeout for the Service object (SQL in our example) on the
Advanced tab of the service object from the default of 60 minutes up to a
maximum of 86400 seconds (24 hours) This will probably help but is not
foolproof: 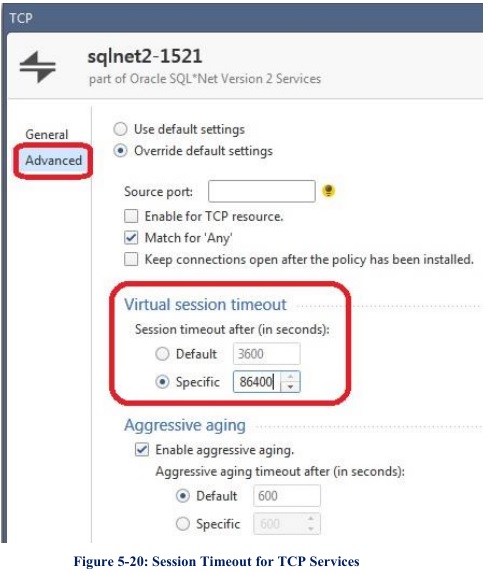 3. Configure the firewall to send a TCP RST packet to both participants of a
connection that has been idled out. Upon receipt of the TCP RST, both
participants instantly realize their connection is gone and launch a new one
immediately to recover from the situation. To enable this feature “on the fly”, the

command is fw ctl set int fw_rst_expired_conn 1 . This setting will
not survive a reboot, so to make it permanent you’ll need to see the following for
more details: sk19746: How to force a Security Gateway to send a TCP RST
packet upon TCP connection expiration.

In some cases however #3 will not fully remediate the situation, and you will be
forced to go one step further with this: fw ctl set int
fw_reject_non_syn 1 . A classic example of an application that requires this
firewall setting is SAP HANA traffic. This setting also handles client port reuse
out of state errors when RST packets from the server to the clients get lost (e.g.
due to policy install or packet loss). Bear in mind however that this setting is
quite likely to make your friendly auditor/penetration tester upset with you, since
the firewall will now issue a TCP RST for all received packets that are out of
state and have the ACK flag set. An auditor running a TCP ACK nmap scan will
have it light up like a Christmas tree with tens of thousands of ports showing up
as filtered instead of closed. For this reason, using this setting is generally not
recommended on an Internet perimeter firewall, but may be acceptable on some
internal firewalls.

This is also what we suspected. Thank you very much for your thorough explanation.

I have a support case open with Checkpoint, but so far no help.

A little supporting information. R80.30 gateways, open hardware, fw accel off during the TCPDUMP. Monitored both interfaces in both directions of the traffic flow.

Any assistance will be greatly appreciated.