I have ran into a few issues, but the most aggravating was when the installer got stuck and I had to reboot in order to get any further, the snapshot that was made by the installer was not removed and a new attempt is telling me there is no free space enough.

CP support tells me to run MDS export, do a fresh install en import, but I would like to avoid the hassle and just remove the LV.

Can I remove this Logical Volume and if so, how do I do that?

It is GAIA running on VMware 5.5. So it is using LVM for Snapshots. "show snapshots" is showing no snapshots, but lvm_manager shows me lv_fcd_new of 300 GB, non configurable, containing: Factory defaults volume, which was not present prior to the upgrade.

I have did that and it is the equivalent of "show snapshots" in CLISH.

No snapshots available and no free space available

What about "delete snapshot <TAB>" from clish ? Nothing ?

Do you have some options in case "set snapshot <TAB>" ?

Some articles regarding Snapshot management:

Snapshot location on Gaia and SecurePlatform

How to add hardware resources, such as log storage, to a VMware Virtual Machine running Gaia OS

While I've heard of customers doing an in-place CPUSE upgrade on their MDS, there can be issues in doing so, particularly if the MDSes also contain a fair amount of logs relative to the available free disk space.

I would expect that TAC would be able to help you manually remove the logical volume that got created here.

Note: one reason to do a migrate export/import in this case: by doing so, you can do a fresh install of R80.20 and leverage the new xfs filesystem, which offers better performance.

That was very important point Dameon! Having xfs by doing export import! I did lab testing using CPUSE and realized only afterwards that I'm missing out on the new file system!

Thanks Dameon, for your reply. Valid point you mention, regarding the xfs filesystem.

The available disk space needed for a snapshot is not related to the amount of disk space occupied by the logs, imho. The logging is written to the lv_log Logical Volume, where the snapshot is creating its own Logical Volume. They live side-by-side on the physical disk, regardless of their content. Please correct me if I am wrong.

Anyway, I will get in touch with Boaz. Hopefully he can help me out.

Fun fact: I did run a "dry run" of the upgrade on a restored snapshot of the original MDS on a different VM and it worked like a charm... That made me confident to do the actual upgrade in production.

Sorry to hear you had problem during installation.

We have worked hard on reducing upgrade failures and I can say that on latest versions (80.10+80.20) we have over 99% success rate.

Notice that rebooting the machine while installer is "stuck" is very problematic, since you might get in a situation that the new partition was created but not defined as snapshot yet.

I guess this is what happened on your machine and that's why you could not run snapshot management commands to remove it.

In order to analyze and make sure it won't happen to others (and for sure not happen in next version) I would need some more information so I will contact you offline to further investigate.

The target is 100% success so if you encounter any problem please contact and we'll solve the issue.

Thanks for reaching out. I will reply to your mail a.s.a.p. I am aware of the fact that the reboot probably got me into this predicament, hopefully we can work this out.

After how many minutes (hours) you did reboot ? What was the overal progress while it stucked ?

Mine didn't get stuck but it took good 4hrs in the lab (that's rather underpowered, 8 cores 24GB ram and RAID 5..)

I did a dry run of the upgrade on a snapshot of the production database and was much quicker than the real thing.

That is why I have stopped it (after 36 minutes).

I would like to go back to the initial question: "Can I remove this Logical Volume and if so, how do I do that?"

Boaz (from CheckPoint) has successfully supported me on removing the Logical Volume.

I am going to re-schedule a service window to upgrade.

what did you end up doing? CPUSE or export and import on fresh filesystem?

DB exports runs successfully 100% and the sever gets rebooted and then it starts import process.

It reverts back to R80.10 automatically when DB import fails at 50%. 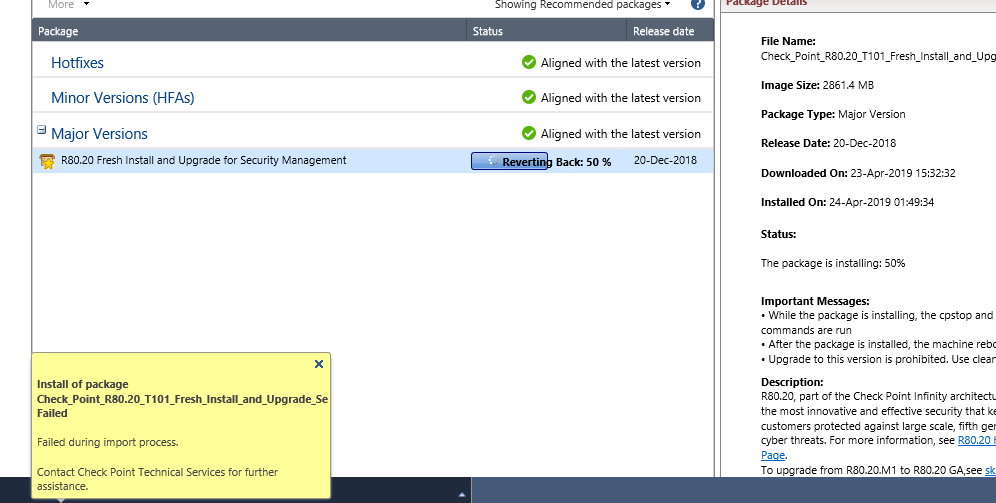 @Amir_Rehman, did you run the pre upgrade verifier before you started the actual upgrade? Especially errors during the database import could be related to issues that should get detected by the verifier on the first hand.

I think it is only required when you upgrade from R77.30 (or lower) version to R80.20 as per CP documentation.

Folder is more than 2GB . Is there any specific file I can share with you ? 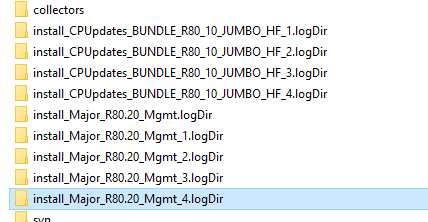 Hello @Amir_Rehman,
I have a similar issue: the import database process stuck at 48%. It's there for more that 45 minutes; no reverting back operation started yet. Did you manage to solve the issue ?

Our investigation has reveled that in Amir's case it is related to a problem in the Endpoint Security Management Server.

Did you have it enabled before the upgrade?

If not please send me the contents your /opt/CPInstLog/ folder.

Sorry I did not update the forum earlier.

My  problem was Endpoint Policy Manager. I disabled EPM Blade and it worked fine.

I don't have Endpoint Policy Manager; however after sometime the Import Database process completed successfully: I had to be patient.

Just curious, how long did it take in your case "stuck at 48% while importing". I am in the same boat at the moment.
Thanks.
0 Kudos
Share
Reply

I have the same issue, how did you solve it?